This week, the Bank of Canada raised its benchmark interest rate to 1%. This caused the Canadian Loonie to climb over 82.6 cents USD, the highest since May 2015. The policy makers based their hike on strength in business investment and exports. However, the Canadian economy tends to slow down in the 4th quarter. This means the rate hike may have arrived a bit too early. Further, Canadian households already hold a staggering amount of debt. Higher borrowing costs aren’t necessarily a great thing.

Across the 49th parallel, the U.S. Federal Reserve is toying with the idea of raising interest rates again. However, Federal Reserve governor Lael Brainard recently warned that it could be tough to raise interest rates with persistently low inflation. Needless to say the U.S. Dollar continues to slip, which is supporting the price of US grains from an international purchasing-power standpoint.

Staying in the currencies, the Brazilian Real has appreciated nearly 10% against the U.S. Dollar in the past two months. Combined with the weaker US futures markets over the past two months, it adds up to slower producer selling down there. Further, soybeans continue to offer the most profitability in Brazil, according to a recent study by CONAB.

Brazilian farmers can start planting first-crop soybeans on Sept. 10 in the south and Sept. 15 in Mato Grosso. Both regions are a little drier than most farmers would like and there doesn’t look to be much rain in the 10-day forecast. Nonetheless, it’s estimated the Brazilian producers will seed nearly 86 million acres of soybeans for their 2017/18 crop. Production estimates are mostly around 110 million tonnes, slightly behind the 2016/17 record harvest of 114 million tonnes.

Next door in Argentina there are some wetter concerns, but it’s not enough to write off the wheat crop that recently got planted there. Southern provinces are the wettest while northern areas have enjoyed the much better weather. Despite some of the wetter planting challenges, the Buenos Aires Grains Exchange things that farmers in Argentina planted 13.2 million acres of wheat this year. That’s up almost 5% from last year. The increase is mainly due to the government scrapping wheat export taxes. With more wheat potentially coming out of Argentina, it will have to compete with the likes of Australia and Russian wheat.

Also concerning Argentina, the debate continues over how much demand will come back to the US soybeans after taxing Argentinian and Indonesian biodiesel imports. Argentinian growers certainly are not happy about the levies but are optimistic about other demand regions, like the EU. Just their luck, the EU announced this week that they will drop its tariffs on Argentinian biodiesel imports from a range of “22% to 25.7%” to just “4.5% to 8.1%” before the end of September.

This decision puts pressure on the amount of European rapeseed that could go into the crush game as it gets substituted with Argentinian options (usually made from soybeans). It’s good for Argentinian soybean producers who are looking for secure markets after the US is going to start taxing biodiesel imports from the South American country.

Staying in oilseeds but switching to reports, this week, Statistics Canada came out with their estimates of available grain still left in Canada for the 2016/17 crop year. At first glance, canola numbers were low, durum numbers were high, and there’s a lot of barley still available. 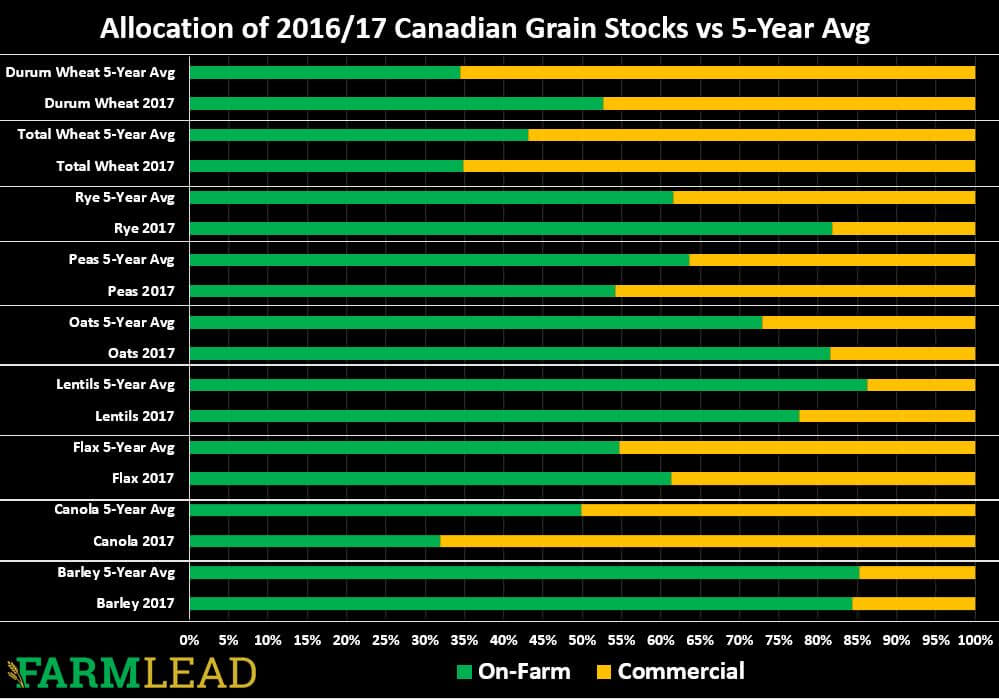 Canola stocks in Canada dropped to a four-year low of 1.35 million tonnes. This is down 25% from the 5-year average. Average pre-report guesstimates were for 1.5 million tonnes. Accordingly, giving the diminished potential of this year’s Canadian canola crop, many farmers are optimistic about better prices.

I would also say that I’m in that camp, but there’s an interesting fact in the numbers this year: farmers are holding on to a lot less canola than in years past. Specifically, only 430,000 MT of canola was still left in Canadian farmers’ bins by the end of July 2017. This amount is 52% lower than what is normally held by farmers to end a crop season.

Digging deeper, the allocation of canola stocks at the end season is usually a 50-50 split between farmers and commercials. However, going into 2017/18, commercials are holding more than 2/3s of all available inventories (basically a similar story to total wheat stocks allocation) There are two possible scenarios here that play out: It may suggest that the commericials’ willingness to bid up for more canola supply may be suppressed in the short term. Conversely, because they still own an absolute amount of about 918,000 MT or just 2% above what they normally have at the end of the July, buying will continue.

My conclusion: it’s business as usual, but you certainly should not expect better basis for canola prices in the short-term. Nonetheless, with the International Grains Council recently raising their estimate of Canadian canola exports to 11.1 million tonnes for the 2016/17 crop year, we should expect that sort of demand to consistent in 2017/18, meaning higher canola prices.

On wheat, the market was expecting 6 million tonnes of all types, but StatsCan served up a bit of a bearish number at 6.865 million tonnes. It’s also about nearly 18% below the 5-year average. At the end of the past five crop years, Canadian farmers have owned about 43% of all total wheat inventories at the end. This year, it’s just 35%, meaning commercials own product that usual to end 2016/17.

Across Canada, available durum stocks in Canada jumped nearly 70% year-over year to 1.86 million tonnes. That’s also 45% higher than the 5-year average. From a holdings standpoint, Canadian farmers still have a lot of durum in the bin. Specifically, over the past five years, they’ve usually had only 443,000 MT left in the bin by the end of July.This year it’s 980,000 MT. This means farmers are holding onto more than 50% of total available Canadian durum supplies, instead of the 35% they usually do.

Over the last week, I’ve heard some rumours in the durum wheat market. The first rumour came from a grain marketing company who says that durum prices have practically no upside because of the amount of feed supplies still in the Canadian pipeline. This means that there are farmers with #3, #4, or #5 Canadian-grade durum quality who are looking to sell it into the milling market. The company says to move to 30% sold. The second rumour is from some buying agents who argue that US mills are bought up through February. 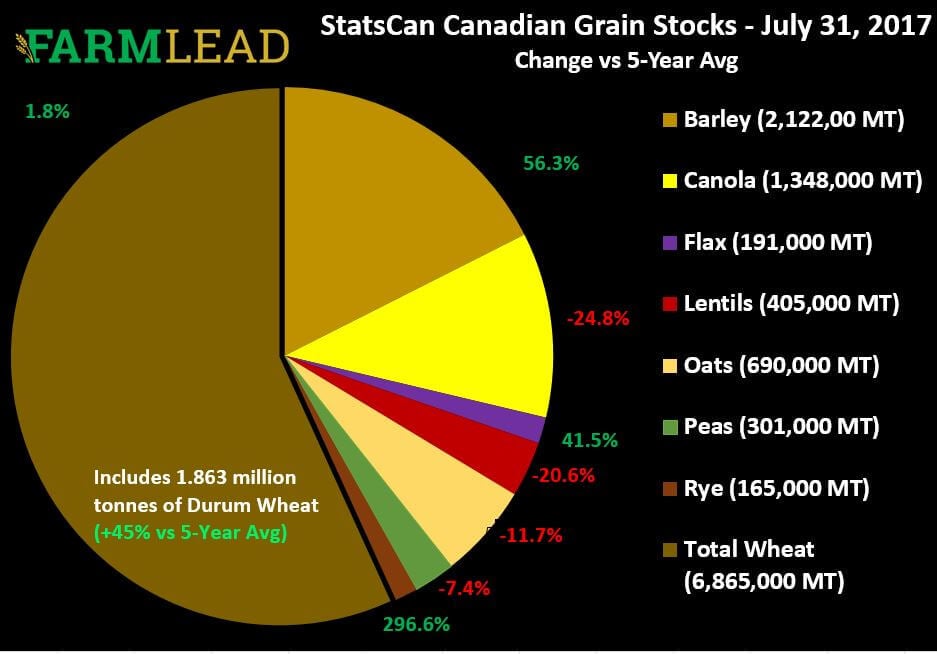 On the latter, I’ve talked with these mills and it doesn’t appear to be true. If they’re bought up to February, you wouldn’t have seen sales above $10 CAD / bushel in July. On the first rumour, there’s definitely some lower-quality 2016/17 supply that will make it into the pipeline. Sure, this will weigh on the upside potential but there’s still upside potential nonetheless. Second, making sales during harvest time is a big no-no in my books. Finally, the company making this call missed the highs of the durum market in November 2014. They were telling farmers to wait for higher prices when $12, $13, and $14 CAD / bushel that was already trading at that time.

How many times in your durum wheat farming career (or any crop for that matter) have you seen the best price of the year in the first week of September? “Very rare” and “nothing comes to mind” were the answers I got when I asked a few wily veterans who’ve planted more than 40 durum crops each. I still think that there’s upside in durum prices but, upside potential will be limited by old crop carry over trying to earn a premium.

With the smaller Canadian AND American crop, we continue to reiterate that there appears to be some upside opportunity for spring wheat prices. This includes durum (as many analysts agree). While you might understand why the price can go up, do you understand what the quality of your wheat is?

Regardless of what lab you deal with, easily order said tests from GrainTests.com. If you’re looking for your wheat to make milling grade, complete both US and Canadian tests. Here’s the FarmLead grain sampling cheat sheet. Download, print, and have your harvest team read it. It’s a simple job to do, especially for the youngest of your harvest team members.

Ultimately, the market took some heat this week but it is preparing itself for Tuesday’s WASDE grain report from the USDA. The mathematical whizzes in Washington don’t tend to change things too much in their September numbers. Nonetheless, the market is expecting the USDA to lower their August WASDE corn yield estimate of 169.5 bushels per acre.

If you’re already thinking into next crop year (2018/19) like we are, there are some contrarian indicators on the horizon, namely acreage. There’s more sentiment that less corn will get planted by American farmers next spring. Soybeans are the obvious easy switch but in some fringe areas like the Northern Plains, spring wheat prices have turned attractive again.

Right now, corn prices, like many other crops like wheat and canola, are paying the farmer to continue and own their grain and/or lock-in available better prices a few months out.

Finding bullish hope in acres — This week in the grain markets

Enjoy the rare, late summer rally — This week in the grain markets