General Mills is voluntarily phasing out the words “gluten-free” from Cheerios packages sold in Canada. The announcement came, according to the Canadian Celiac Association (CCA), in a letter addressed to a Canadian consumer who had filed a complaint against the product.

In response to our own email, General Mills Canada said the company will remove the label until Health Canada and the Canadian Food Inspection Agency (CFIA) “publish a consistent testing protocol for products containing oats.”

Gluten-free claims are permitted on oats by Health Canada’s Marketing Authorizations when they do not contain more than 20 parts per million of gluten from wheat, rye, barley or their hybridized strains. Only these may be identified as “gluten-free oats”.

If more than 20 ppm of gluten is found to be present in food labeled “gluten-free”, the food may be in violation of the Food and Drugs Act, and could be subject to enforcement actions, including the possibility of recall.

Where the rules come from

Roughly one percent of Canadians live with celiac disease, a condition which sees gluten damage the absorptive surface of the small intestine. Since gluten is found in many cereal grains, it also ends up as a key ingredient in many of the products on grocery store shelves. For those who suffer upon even accidental cross-contamination of minute quantities of gluten-containing food, finding “gluten-free” options is crucial.

Honey Nut Cheerios’ Buzz is Disappearing, But Honeybees Are Not
General Mills Rolls out GMO-Free Cheerios

According to Health Canada, studies show variation in the amount of gluten people with celiac disease can tolerate. But one study showed 10mg/day appeared to be safe for most of the subjects involved. After conducting exposure estimations, and accounting for variations in food consumption, Health Canada concluded that if gluten levels in grain-containing foods did not exceed 20ppm, exposure to gluten would remain below 10mg/day for the majority of people studied.

A 2011 study showed commercial oat samples tested high for gluten contamination. Contamination can occur as early as in the field from volunteer cereal grains popping up and being harvested in an oat crop, to cross-contamination through equipment, storage, milling or packaging.

Why Cheerios is removing claim 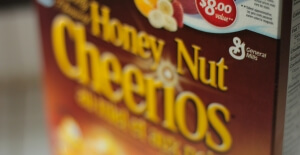 As mentioned, cross-contamination can occur during many different processes along the supply chain. In order to remove wheat and other non-oat grains, General Mills, according to CCA, uses a mechanical sorting system. And, gluten-containing grains can be close in size, shape and colour to oats. Plus, it can be incredibly difficult to sort broken kernels this way.

The CCA was especially critical of General Mills’ testing procedures, suggesting that the company might not be able to detect “hot spots”. In other words, the boxes of Cheerios might lack uniformity, with some containing higher levels of gluten than others.

Each serving of Cheerios products in Canada are gluten-free, as defined by the current regulatory standard of containing less than 20 ppm of gluten. General Mills Canada has made the decision to voluntarily remove the gluten-free label from our Cheerios products in Canada until Health Canada and The Canadian Food Inspection Agency (CFIA) publish a consistent testing protocol for products containing oats. At this time the product is not changing, just the label on the box. We look forward to labeling the Cheerios products as gluten-free once consensus is reached on a consistent testing protocol for products containing oats. – General Mills statement

In an email to RealAgriculture, General Mills said it has received a small number of complaints from customers, but that every one is taken seriously.

“We have conducted extensive testing and are confident that our gluten-free Cheerios products comply with the gluten-free standard in Canada and the United States. We recognize that the introduction of new, higher fiber foods, such as oats, can cause some digestive symptoms for certain consumers. We recommend individuals talk to their doctor if they are especially sensitive to gluten or have other intolerances/allergies, to determine what level is acceptable for their specific medical condition.”

Hi Balj – General Mills has made the decision to remove the gluten-free label from Cheerios products in Canada.

“We are delighted to hear that the regulators have determined that the claim must be removed from the packages”, said Melissa Secord, executive director of the Canadian Celiac Association.  “Based on the advice of the members of our Professional Advisory Board, the experts of the Gluten-Free Certification Program, and other professionals working in the field, we believe that there is not adequate evidence to support the claim. When added to many reports from consumers with celiac disease reacting to eating the cereal, we believe this is the safe recommendation for Canadians.”

The CCA plans to follow-up with Health Canada and the Canadian Food Inspection Agency, to monitor the decision by General Mills, and other products sold in the country.

The CCA has its own gluten-free label, and is currently examining the scope of gluten contamination in oats grown in Canada with from Agriculture and Agri-Food Canada. The project is scheduled to conclude in the spring of 2018.

Cheerios in the U.S., meanwhile, will continue to be labeled “gluten-free”.

Tote Bags Identified as Most Likely Carrier of PEDv In U.S.