Usually Friday the 13th is an unlucky day. For grain prices though, Friday, October the 13th was a good omen.

On Friday alone, Chicago soft red winter wheat gained 2.15%, oats gained 1.9%, and corn was up 1.05%. Oats was the big winner of the week, though, up 6.25%. This was followed by soybeans which improved 2.8% since last week, thanks to a bullish WASDE report (more on that later), which helped the oilseed finally climb back above $10 USD/bushel on the Chicago Board of Trade. Corn was next in line, improving 0.8% to see December corn close above $3.50 for the week. Canola improved 0.4% in the week on the heels of soybean’s strength. Wheat continued to falter, with Chicago wheat falling 0.85% and Minneapolis hard red spring wheat dropping 2.3%, while Kansas City hard red winter wheat traded mostly sideways.

It’s worth noting though that KC HRW wheat is seeing nearly a 70 cents USD/bushel carry from December 2017 to September 2018 contract. It’s about 60 cents for Chicago SRW wheat for the same period, but only about 35 cents for Minneapolis HRS wheat.

The big news this week was all about the USDA’s monthly world agricultural supply and demand estimates which came out on Thursday, October 12th. Going into this month’s WASDE report, the focus was on yields, despite the bearishness that the reports in September and August provided.

For canola, there wasn’t much changed in this USDA report. Canadian production was stayed at 19.9 million tonnes, well below Statistics Canada’s current forecast. We won’t get an update from the latter on their estimates of Canadian grain production until December 6th, 2017. In the U.S., harvested canola acres are up 20%, but yields are 24% lower. This figure equates to a 1.27 million-tonne American harvest. That’s 9% lower than 2016’s harvest of 1.4 million tonnes. Global carryout numbers of canola/rapeseed for the end of 2017/18 was lowered below 5 million tonnes for the first time since 2012/13. 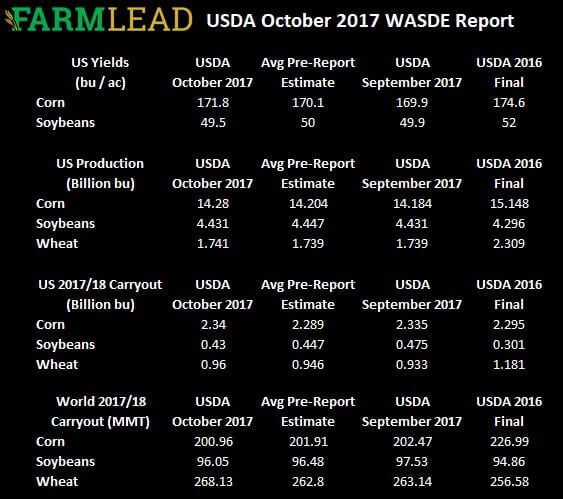 The USDA dropped average US soybean yields to 49.5 bushels per acre when the market was expecting a 50-handle. September’s estimate was 49.9 bushels per acre. However, because of the harvested acreage number increasing by 740,000 acres, US soybeans production remained unchanged at 4.43 billion bushels. This number is a new production record though. Good demand numbers helped push American 2017/18 ending stocks down to 430 million bushels. Comparably, the market was expecting 447 million while the September’s WASDE report showed 475 million bushels. Given these production levels and carry out numbers, this would suggest the highest American soybeans stocks-to-use ratio in a decade of 10%.

Globally, total 2017/18 soybeans production was lowered by 560,000 MT. Further, 2017/18 ending stocks were dropped by nearly 1.5 million tonnes. The change was attributed mainly to smaller carryout in the U.S. and Brazil, both thanks to solid export demand. It’s worth noting that Brazil has captured a greater share of global soybean export growth in the past 5 years. They own nearly half while the U.S. only has accounted for 40% of the growth.

Staying in Brazil, total rainfall in largest-producing state Mato Grosso since September 1st through October 10th is just above 1.5 inches. A year ago, it was nearly double that. Over the next 2 weeks, it’s expected another 1.5 inches will fall in Mato Grosso. This 2-month total in Brazil’s largest grain-growing state would be very similar to what was seen in 2015. That year, soybeans production estimates across the country topped 100 million tonnes. However, drier conditions led to a crop of 96.5 million tonnes. On the demand front, the USDA reports that the Brazilian government is expected to approve a biodiesel blending mandate in the country of 10% by March 2018. This would potential increase biodiesel production year-over-year by 25%!

For corn, the USDA continued to be bearish, increasing average U.S. yields to 171.8 bushels per acre. That figure is up nearly 2 bushels from the September estimate and a good hike from the market’s pre-report expectation of 170.1. It is also the second-best yield ever after last year’s record of 174.6 bushels per acre. Record yields have been forecasted in most of the southeastern states, including Mississippi, Louisiana, Alabama, Georgia, but also in northern states like Michigan and Pennsylvania. Yields were raised in all three i-states (Illinois, Iowa, & Indiana).

This trend would put total production at nearly 14.3 billion bushels, also the second-largest number after last year’s record 15.15 billion bushel crop. The increase likely would’ve been higher if it wasn’t for harvested acreage was decreased by 400,000 acres. What’s interesting to factor in here though is that the U.S. corn harvest is behind schedule. The last time harvest was this delayed was in 2014. As pointed out by Reuters, that year, the USDA ended up lowering the U.S. average corn yield by 3.2 bushels from its October estimate.

Of note was lower carry out in China and Mexico. For the People’s Republic, the USDA thinks they’ll end the year at 79.2 million tonnes as they continue to work through their mountains of multi-year-old corn. For Mexico, 2017/18 ending stocks were lowered by about 1.5 million tonnes to 4.78 million. This figure would be a 26% decline from last year’s ending stocks figure. 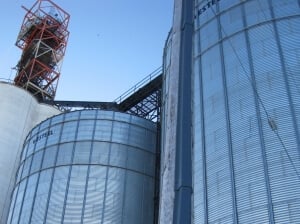 On the wheat front, things continue to be bearish according to the USDA. Total world production was raised yet again, this time by more 6 million tonnes to 751.2 million tonnes. The increases were attributed to Canada, Russia, Europe, and India. These increases more than offset a 1 million-tonne drop in Australia to 21.5 million tonnes of wheat production in 2017/18.

For the Land Down Undaa, this number seems a bit puzzling as it is on the top-end of all estimates out there. Further, the USDA is forecasting that Australia will export 18 million tonnes of wheat this year. That seems very, very unlikely. This means that there possibly is 3-5 million tonnes of wheat export business that will go somewhere. Most guesses are that Black Sea (looking at you Russia) will win the business. However, it’s notable how Venezuela has been buying Russian wheat but isn’t too happy with the quality (protein is too low).

Ultimately, grain prices are starting to look better. At least if Thursday and Friday trading of this past week are any indication, the lows are certainly behind us. The asterisk here is that there’s still a lot of grain in the world. We continue to need a production scare, and the best candidate is going to be South America. Sure, Australia is experiencing some challenging weather. However, any yields below average on the paddocks of the Land Down Undaa is seemingly offset by above-average yields found in Black Sea fields.

Harvest is nearly finished for most Western Canadian farmers and corn and soybean harvest is hitting full-tilt everywhere else across North America. We were lucky to see some great prices a year ago around this time. Should we expect the same?

Returning to the average — This week in the grain markets