Corn futures increased by 3 cents today after the USDA threw a curve-ball by increasing corn yields well above the market expectations. The average trade estimates were between 169.7 and 169.9 bushels an acre – nearly unchanged from the last USDA estimate of 169.9 bushels. The USDA, in typical fashion, threw their ace of spades on the table (which, by the way, apparently they have an endless supply of), estimating average yields at 171.8 bushels an acre.

There is no doubt that the warmer September, followed by the colder August was a saving grace for Ontario corn yields. This is no different to the Corn Belt which had a similar weather pattern. The result: an increase in implied ear weight.

Is the reported yield unbelievable? No. Could it be the USDA’s highest estimate? Sure.

The good news for corn is that they also reduced harvested acres by 400 000, partly at the expense of an increase in soybean harvested acres of 700 000. The net result: 2017 production increasing from 14.184 billion bushels to 14.280. Small increases in demand offset a fraction of the supply, with an increase in demand of 35 million bushels. But really, what has changed?

U.S. carry out was reported at 2.34 billion bushels — increasing by 105 million bushels from September’s estimate. That is a big number no matter which way you slice it.

The corn market broke below the August 31st December futures lows of 3.44¼ this morning, notching a new low at 3.42½. Following the USDA report, despite the somewhat bearish tone, corn futures rose by a few cents. Simply, a big number, is a big number.

With ending stocks that large, what difference does a small increase really mean? Not much. High supply equates to low volatility. Some food for thought if you think a decline in yields could sustain a rally in the coming months – the supply will be large. The market may have shown their hand with the failure to sustain a push lower after breaking the August 31st lows.

One has to wonder, with the funds short position so large, could this failed break lower be a catalyst for some profit taking and additional support for the market. Ignoring all the fundamental noise, seasonally we are still in a period of expected lows. Did we set the low today? 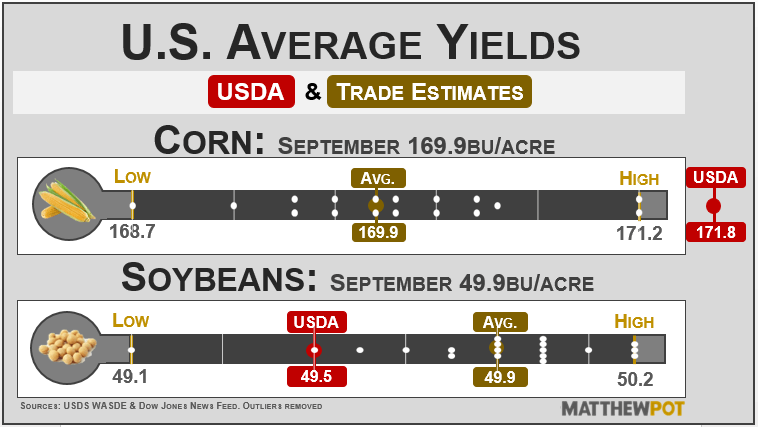 Soybean futures rallied 27 cents after the USDA lowered soybean yields by 0.4 bushels to an average yield of 49.5 bushels. On the flip side, the USDA also increased harvested acres by 740 000. The net result for U.S. production for 2017 was a decline of 422 bushels. That’s less production than that ten acre field you rent, behind that secluded forest, past a few ditches, with a path your combine barely fits through. U.S. demand on the report did not change.

Net story, ending stocks fell from 475 to 430 in beginning stocks, below market expectations. The market pushed above the key resistance with $9.88 November futures following the report, which should make some of the chart-followers happy if we hold above tomorrow. There’s still a sobering aspect present in the market, as production of 4.431 billion bushels and ending stocks of 430 million still result in a stocks to use of 10% — the highest in ten years.

Now that we have this report past us, the weather in Brazil will take centre stage, with U.S. export news sitting in the passenger’s seat. If the dry conditions persist, or China keeps knocking on the door for soybeans, the market could follow through with some more strength. Flip those scenarios around, and the contrary may occur.

In the big picture, the $9.85-$9.90 November futures was my selling point, with the next target around $10.20. For all you cash-sellers out — which is likely the majority of you — this equates to around $12.00 Hamilton Delivered (current) and $12.50, respectively, taking into account the current CAD/USD, a conversation which is a whole other deck of cards. 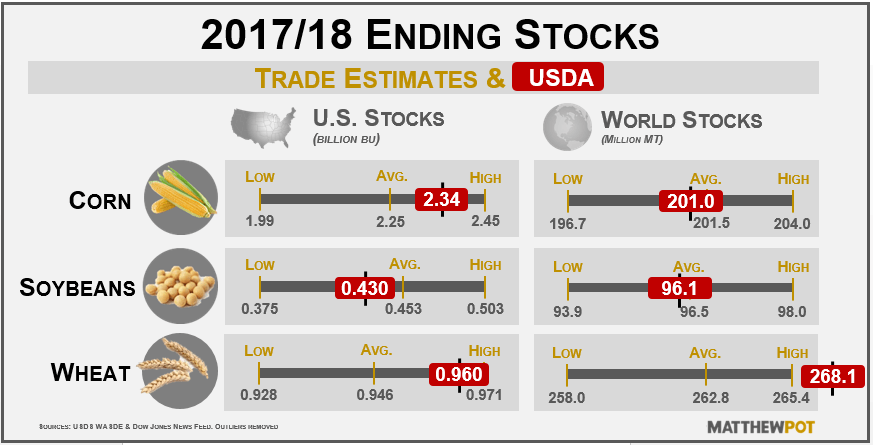 I likely should have asked you if you wanted the good news or the bad news first. Oh well…

Remember that kid in grade school who was distracted by the butterflies and still at the starting line while the other kids were crossing the finish line? (No, that wasn’t me at all…) That was wheat today.

All in all, nothing to get excited about from a futures standpoint with an increase in global production of 5 mmt. The charting support is right below the current Chicago December Futures at $4.22½ – one which is an important support to hold on to. But, why are we talking about this? You sold your wheat months ago at the highs… 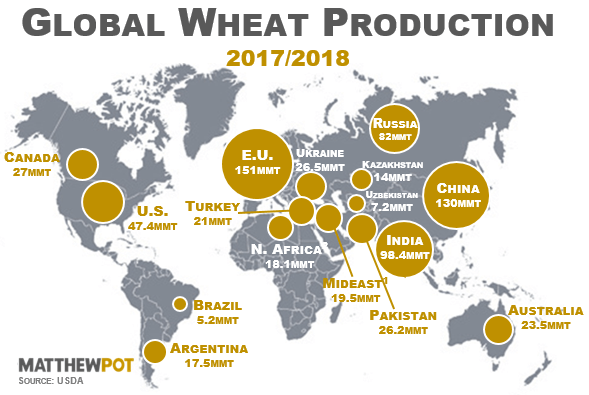 Stay tuned for more from Matthew Pot on RealAgriculture, and sign up for a free trial of Grain Perspectives.