Cattle markets have dropped off their highs from a few weeks ago, but they’re still well ahead of where they were last year at this time. The February live cattle contract, for example, is up 28 percent in the last year.

“We’ve had solid markets all the way around,” says Anne Wasko of Gateway Livestock Exchange, leading off this latest Beef Market Update with Shaun Haney.

U.S. markets were down slightly this week, with the Thanksgiving holiday south of the border.

“A lot of the news, both in the U.S. and in Western Canada, over the last many months has been about how we’re continuing to see strong feedlot profitability, good feeding margins, and we’ve been placing more cattle on feed. It’s been a very active fall run in Western Canada and the U.S., but on the flip side, we’ve been selling aggressively. We’ve been staying very current on the front end,” she notes.

While domestic demand for all proteins has been strong, the export market for beef has also been hot, with Canadian beef export tonnage on pace for its highest year since 2010. That’s thanks to increased sales into the U.S., Japan, Hong Kong/China and Mexico.

“Those four regions make up about 96 percent of our export market and they’re all up this year. We’re kind of firing on all cylinders and we need all these to keep happening in 2018,” says Wasko.

The price story isn’t complete without discussing basis, as Anne and Shaun discuss the impact basis is having on local prices, as well as where the market could be headed from here. 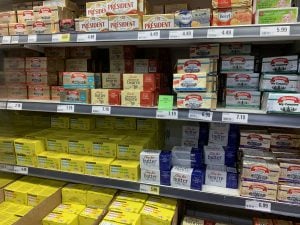 Why are people squeezing butter?

The theories range from "evil" American milk making its way into Canada, to mistreatment of cows or mysterious supplements fed to cows, to enzyme activity; but any sort of factual explanation for why some Canadians are saying butter has either changed consistency at room temperature or changed in flavour since August 2020 remains a mystery.…Read more »

Agriculture should welcome evidence-based consultations — and demand more of them