Budweiser is planning to send malt barley seed into space next week in a project that can be described as a combination of futuristic agronomy research and marketing.

The famous Anheuser-Busch brand made a commitment earlier this year to be the first beer on Mars if humans colonize the red planet.

“Budweiser is always pushing the boundaries of innovation and we are inspired by the collective American Dream to get to Mars,” said Ricardo Marques, vice president, Budweiser, in a news release. “We are excited to begin our research to brew beer for the red planet.”

Officially dubbed “The Germination of ABI Voyager Barley Seeds in Microgravity project” on NASA’s website, one of the experiments will look at how barley seed responds to exposure to a microgravity environment. 3,500 seeds will be placed in “soft stow” for the duration of the flight. They’ll be grown out to evaluate exposure effects after the flight.

The second experiment will test germination in a microgravity environment. 20 seeds will be placed test tubes containing growth media in two Space Tango CubeLabs — lockers designed for small-scale experiments on the ISS.  Budweiser says the seeds will be “fed and watered in a similar fashion as to how they are grown here on Earth….This experiment will test to see if the seeds grow at the same rate in space.” 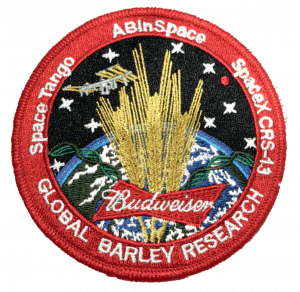 “This partnership will not only produce scientific data that could lead to barley production improvements on Earth but could also lead to the first beer produced on Mars,” said Space Tango Program Manager Gentry Barnett.

The two-row malt variety — ABI Voyager — was developed by Busch Agricultural Resources. In 2009, it was entered into the Canadian Western Two-Row Barley Cooperative Registration Trials as TR09402.

The company says the seeds will spend approximately 30 days in space before being brought back for analysis. The seedlings grown in space will be evaluated for possible genetic alterations and morphological abnormalities.

RealAg Crop Update Ontario: The Threat of Frost Looms as the Countdown to Harvest Continues