The Canola Council of Canada is reviewing all the services and programs it offers, including staffing, as it prepares for a significant budget cut and restructuring in 2018.

At least two large grain company and processor members are not willing to maintain their current funding for the council. Both companies that sources say are pushing for the changes have refused to  comment publicly.

The internal pressure from these grain company members is casting uncertainty over what the council’s role will be in the future, especially in the areas of agronomy and market development.

Recognizing value in keeping the canola industry group together, board members have agreed to reduce the organization’s budget for 2018, with producer groups taking on a larger percentage share of the overall funding next year.

The Canola Council board of directors, which includes representatives from the provincial and national grower organizations, grain companies, processors, and life science companies, has held frequent meetings and conference calls this fall to determine a path forward. President Jim Everson agreed to speak with RealAgriculture following a board meeting on November 6th.

“The board has asked us to look at the efficiency of the services and programs we’re providing. We will, for 2018, be reducing our budget somewhat,” he confirmed in the interview below, discussing the council’s budget situation on November 8th.

Without sharing a specific number or percentage, Everson said the board has reached a consensus on how much needs to be removed from the budget for next year.

Other sources say the board has agreed to a budget cut in the range of 25 to 30 percent for 2018, while a full organizational review and restructuring take place prior to the 2019 fiscal year.

The council’s financial statements are not posted publicly, but revenues have increased significantly with canola production rising from 9.6 million tonnes in 2007 to 19.6 million tonnes in 2016. In recent years, grain companies and processors have paid a voluntary levy of around 23 cents per tonne of canola exported or processed. Farmers also paid a 23 cents per tonne levy through their provincial organizations.

A pair of sources told RealAg that the total amount paid by producer organizations will not be increasing in 2018, but the share of funding provided by producer groups could increase from around 46 percent in 2017 to approximately 50 percent in 2018.

Multiple stakeholders who have spoken with RealAg say they have no issue with reviewing where dollars are spent and whether there have been diminishing returns as production and revenues have climbed.

“The Canola Council is, I would say, an organization that is well-resourced. Production has increased and continues to go up. Resources have been tied to production levels and so I think it’s responsible on the board of directors’ part to always look at the efficiency in which we’re delivering services, what those services are and what the needs of the industry are going forward. We’re going through that kind of a process currently,” said Everson.

He noted the board remains committed to its strategic plan, which includes increasing the average canola yield to 52 bushels/acre and production to 26 million tonnes by 2025.

The council currently operates with four main pillars: agronomy, market access, market development and research. Sources say the grain companies are pressuring the council to prioritize market access and reduce funding for the other pillars.

Other stakeholders see the council as a four-legged stool and are concerned that potentially reduced funding for agronomy, research and generic market development, which generally have a longer time horizon before gaining a return on investment, will be detrimental to the industry in the long term.

What the changes in 2018 and beyond mean for the council’s agronomy team is still unclear.

“I think we do a terrific job with our agronomic staff, and not just the Canola Council’s staff, but the agronomy professionals across Western Canada,” said Everson. (It’s worth noting some grain company members have their own agronomists and agronomic services.)

He said no decisions had been made on staffing cuts to-date, noting “we are in the middle of a process, so we have not got to the point.” 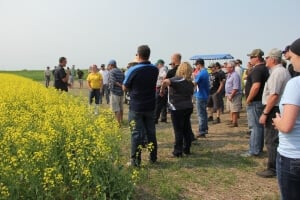 Grain company members are also calling for a merger with other national oilseed groups. Everson, who served as the president of Soy Canada until the spring of 2017, said he won’t rule anything out.

“I don’t think anything is off the table in terms of ideas for the future, but I wouldn’t suggest there will be a merger of those two associations in the near future, in 2017 or 2018, but certainly the idea of working together is something we would want to pursue.”

Regarding research, one source noted the timing of the shake-up is complicating the process of applying for government research funding, with the new five-year Canadian Agricultural Partnership beginning in April 2018. The Canola Council’s national industry-wide identity has traditionally been used to leverage producer dollars for government funding, but there’s now uncertainty surrounding the council’s role in the future.

Everson says producers can expect to hear more about the changes through their provincial grower organizations.