As Western Canadian farmers seek another crop to add to their rotations, seed and crop input suppliers are preparing for another increase in soybean acres on the prairies in 2018.

The area where soybeans are being grown has expanded across much of Saskatchewan and into southern and central Alberta, creeping north of highway 16 near Edmonton, notes Wilt Billing, Crop Production Services’ (CPS) product line manager for corn and soybeans.

The key decision for new growers is selecting a variety with an appropriate maturity for their growing area, he says.

“Seed companies are now breeding ultra-early soybeans into that triple-zero relative maturity group, which are expanding acres across western Canada and into Alberta now,” says Billing, in the interview below.

When it comes to field selection, soybeans are fairly flexible. Since soybeans require late season moisture, producers sometimes avoid planting them on lighter, sandy soils, however many growers have still had success growing them in those soil types, notes Billing. 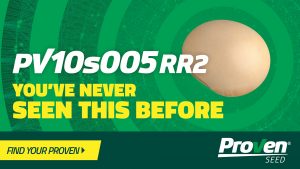 As soybean harvest requires lowering the combine header, he suggests rolling soybean fields to reduce problems with uneven ground or stones at harvest.

Research suggests planting soybeans early, but the seed should be planted into warm soil.

“Soybeans are very prone to soil seedling diseases,” warns Billing. “So, research has shown that temperatures around 10 degrees are optimal for the first 24 hours after planting…If growers put beans into cooler soils, they’re just more prone to have a lower establishment rate.”

And do not overlook the importance of inoculation. Soybeans are high nitrogen users, demanding anywhere from four to six pounds of nitrogen per bushel of yield. Fortunately, with proper inoculation, they can produce most of the nitrogen they need. Billing suggests double-applying, with two different types of inoculant.

Nitrogen prices for North American farmers are no longer at their 2022 highs, but they still have a long way to drop before returning to where they were a few years ago. Where that floor is for the market will largely be determined by European energy policy, John Daniels, fertilizer product manager for Paterson GlobalFoods,…