Through her studies over the past three years, she’s discovered an abnormally high rate of depression and other mental illnesses among farmers (and veterinarians). Traditionally, farmers seldom discussed such problems publicly. But through Jones-Bitton, they’ve found a release valve, and hope that raising awareness will lead to programs that address the situation.

Earlier this month, her observations were shared with a new, unexpected audience: art enthusiasts, at the University’s fine arts building.

There, in the Bachinski/Chu Print Study Collection, Jones-Bitton applied her mental health lens to a farm-themed engraving by Czech-Canadian artist Antonin “Tony” Dimitrov (1928-2014), as a speaker during the lunch-time series called In The Galley (ITG).

The series organizers invite scholars from a variety of disciplines to connect their research interests with a work of art of their choice, from the 2,200-piece collection, and share the connection with others. Faculty members who take part in the ITG talks are invited to find ways in which to strengthen their ties to our cultural communities and to develop and foster new relationships in an effort to provide richer, more varied and productive communities for our students and colleagues.

Jones-Bitton’s choice was a barren-looking farm scene called “The Early Spring”. Curator and professor Christina Smylitopoulos says the farm may be near Bobcaygeon, where the artist and his wife settled after fleeing their home country in 1968.

In the foreground, a muddy, empty road passes in front of a frozen, rolling field, marked by dramatic brownish-black lines that appear to be furrows, or dirty snow that’s accumulated in furrows over the winter.

Far in the distance, under turbulent clouds, a majestic barn and outbuildings break the horizon. While the field and road are mostly void of detail, the farmstead is richly etched with scores of lines. Colour further distinguishes the foreground and the background; the latter appears to have a light blue wash over it. 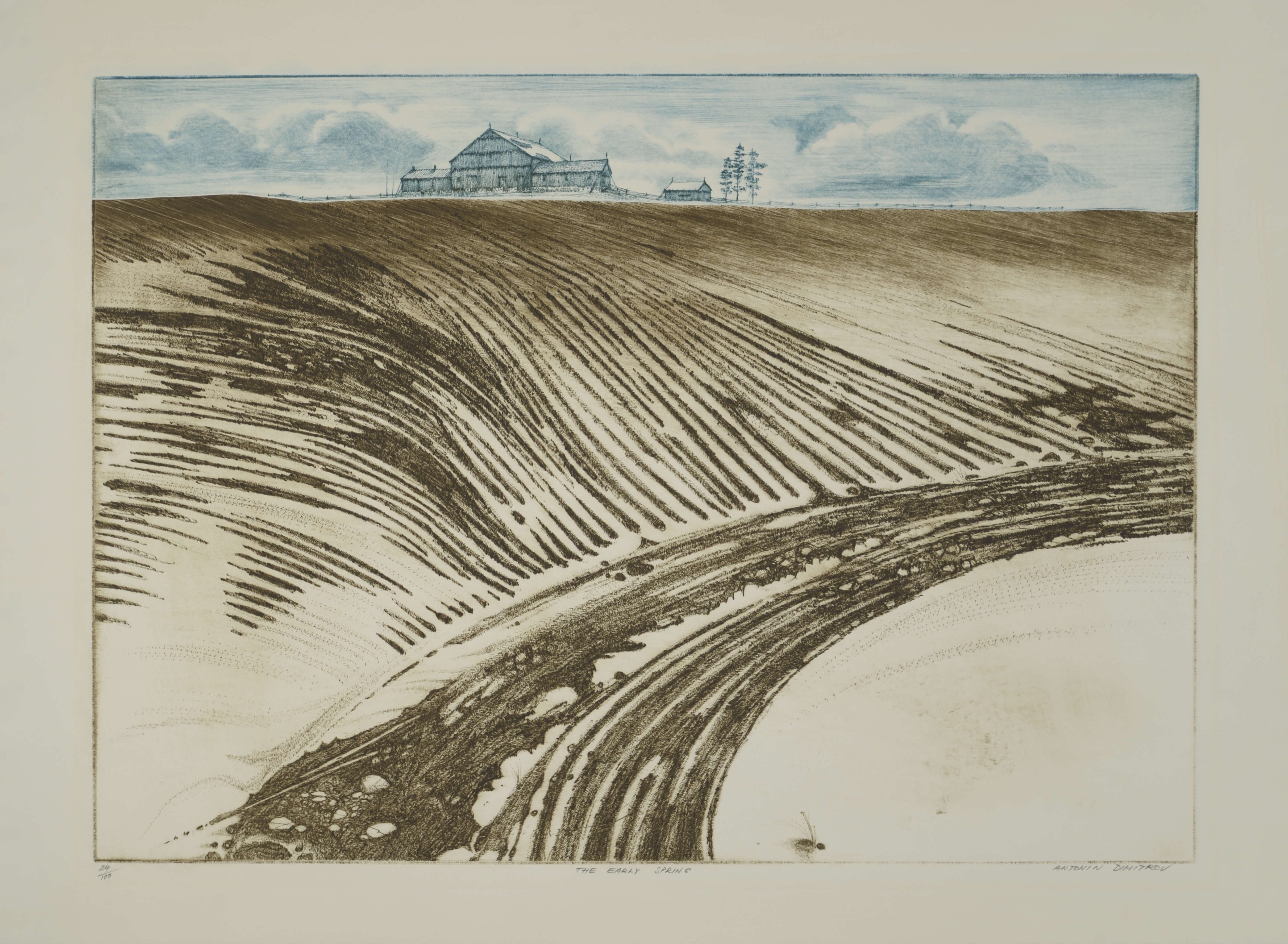 The only life in the work is what appears to be a small plant, probably a weed, in an otherwise desolate field. Perhaps it’s overwintered there, or is an early bloomer. But it’s clearly on its own — much like farmers, says Jones-Bitton.

“This work of art captures what many farmers are feeling — isolated, alone, melancholic — under dark clouds,” she says. “It represents the mental health struggles that I know some farmers are experiencing.”

Jones-Bitton says the farms she’s visited as a researcher and veterinarian are welcoming places, teeming with growth and activity. However, many are hiding another reality. Globally, farmers experience higher levels of psychological stress, distress and suicide than the general populations, or other occupations.

Jones-Bitton says part of farmers’ struggle is the negative way activists and others portray them, accusing them of being “factory farms” and mistreating animals. In Dimitrov’s work, the divide between the road and the farm represents for her the chasm between rural and urban Canada.

“I hear about people who actively take a stand against farmers and modern agriculture, but haven’t based their opinions on first-hand knowledge or reputable sources.” Jones-Bitton says all this negatively weighs on farmers, and can drive them into a mental health tailspin. “I look at this piece and wonder: Will we continue down the path of ignoring the people and families who produced our food, or does the road swing around and lead up to the farm?”

The next presenter in the series is professor Wayne Caldwell, speaking December 6 on his reflections on rural planning. The public is welcome to attend.