On Thursday the United States Department of Agriculture (USDA) came out with their monthly world agricultural supply and demand estimates (WASDE). Usually, November is a bit of a sleeper month, but given the delayed corn harvest in the U.S., there were some ideas that the USDA might provide the market something in line with the pre-report average expectations. Unfortunately, it didn’t.

The grain complex was trending higher to end this week, until the USDA came out with some bearish data. Thus, corn ended 1.35% lower, and January soybeans dropped from the $10 handle it was nudging to end the week where it started around $9.87. Canola was similar: down just 0.3% for the week (mainly thanks to the Canadian Dollar improved by 0.6% for the week). Kansas City hard red winter wheat gained 1.5%, outpacing Chicago soft red winter wheat, which gained 1.15%.

The USDA didn’t change too much on the wheat balance sheet in this week’s WASDE. We were looking for some production downgrades from the southern hemisphere in Australia and Argentina, but they never came. The only update from the southern hemisphere came from CONAB, which dropped Brazil’s wheat production estimate to 4.57 million tonnes. That’s a five-year low and nearly one-third lower than last year’s record crop.

Total Russian wheat exports are tracking about 13% ahead of last year with 9.54 million tonnes shipped out in the first 3 months of the 2017/18 marketing year. From a January to September measurement though, nearly 21 million tonnes were shipped out. That’s 18% better than what was done in 2016 over the same timeframe.

While the record corn yield is clearly bearish, corn prices dropped less than 7 cents on the day. Most people, including yours truly, were expecting more of a drop. Why didn’t it happen? Managed money is already extremely bearish on the market with nearly 200,000 short positions. With such little volume in the trade, perhaps no one is willing catch that knife. 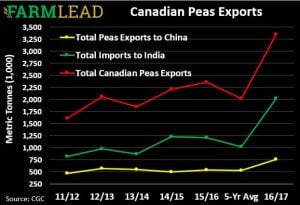 This week, we also got the heads-up from India that they’re going to start taxing the importation of peas by 50% and wheat by 20%. This is bad news for Canada considering India is the number one destination for pea exports — by a long shot. Last year, In the 2016/17 crop marketing year, Canada export 2.02 million tonnes of peas to India. The next closest was China at 755,000.

Maybe last year as an anomaly? Average total Canadian peas exports in the five years preceding last year’s record campaign barely averaged 2 million tonnes. Further, India usually only accounts for about 50% of all Canadian pea exports. Thus, while the Indian peas import tax is certainly bad news, perhaps the exportation of Canadian peas is going to return to more normalized levels. Case in point: to date, only about 850,000 MT of peas have been shipped out. Last year at this time, almost 1.5 million tonnes of peas had sailed out of Canada.

Flip-Flopping Trade, Fed Decision and a Focus on Risk Still On the Table — This Week in the Markets

RealAg Markets: Second day of red all over the screen

Plans have been unveiled for another major soybean crush plant to be built in North Dakota. Epitome Energy LLC has announced the construction of a US$400 million facility on the north side of Grand Forks, North Dakota — approximately 120 km (75 miles) south of Emerson, Manitoba. It marks the third — and most northerly…