This week the Ontario government passed Bill 148, the Fair Workplaces Better Jobs Act. Among other changes to workplace laws, it will mean an increase in the province’s minimum wage, from $11.60 to $14 on January 1, and $15 on the same day in 2019. With other provinces potentially following suit, the potential impacts are being debated heavily within corporate boardrooms and coffee shops across Canada. So, what about the impact on agriculture? Will farmers be some of the hardest businesses hit by this new legislation?

From the Globe and Mail: Ontario gets it right with move to higher minimum wage

Cities like Seattle have seen mixed results on similar legislation, depending on whether you look at the number of jobs or total income earned by minimum wage employees.

On Friday’s episode of RealAg Radio, the issues panel (Kelvin Heppner, Jeff English and Andrew Campbell) ran out of time but recorded a bonus conversation on this very topic. All of the panelists agreed that it’s as much about the speed of the implementation as it is the dollar amount.

“The amount and the speed of the increase is a concern as well as our ability to compete with other countries, no matter the sector,” says Strathrooy, ON dairy farmer, Andrew Campbell.

With Alberta considering the same kind of wage change, will producers of dairy, pork, beef, mushrooms, blueberries, corn and soybeans all suffer from a policy deemed to create opportunity for even the lowest wage earners? 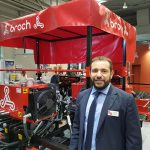 This discussion reminded me of a video we filmed at Agritechnica with Broch, an Italian company specializing in garlic production equipment. The video featured the Broch garlic harvester, which is sold in British Columbia and Ontario and can be run by one operator. It replaces the work of 47 people. Comparing the cost of that harvester and one employee with the work of 47 workers (who will soon be making $15 per hour) puts the discussion in context.

Still, for some farmers, the economics of people earning a “decent wage” are table stakes and not a driver towards automation:

If a business can’t afford $15 an hour then it shouldn’t be a business. And $15 is not going to spur automation, automation is inevitable

As I stated in our panel discussion, “to put it simply, this is a very complex issue.”

We’d like to hear from you. Do you believe the impacts are overstated? If you are employing people at minimum wage on your farm, will you cut back their hours or engage layoffs? Will a higher minimum wage have you considering more automation? Leave us your thoughts in the comment section below.

Master the necessary, do what’s possible to build resiliency into your farm

Eastern Canadian farmers who paid millions of dollars more for fertilizer in 2022 due to sanctions on imports from Russia will not be getting a refund, as the Canadian government is forwarding $115 million in expected tariff revenues to repair the power grid in Ukraine. Deputy Prime Minister and Finance Minister Chrystia Freeland announced the…