If we’re looking back at where we started 2017, there isn’t much green on the board. More specifically, since the markets opened 2017 in January, despite the U.S. Dollar losing a fair amount, agricultural commodity prices on the futures board haven’t performed amazingly (see chart below) As a side note, the best performing commodity in 2017 was palladium, jumping 54.5% from the start of the year. The worst-performing commodity was orange juice, down nearly 30%. 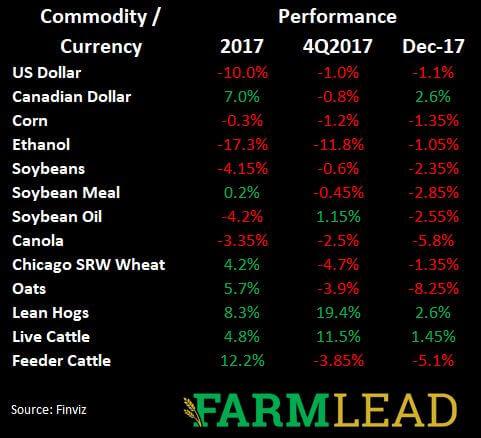 We will be publishing a crop-by-crop year-in-review on FarmLead over the weekend but here’s a brief breakdown of what we saw in 2017 in grain markets.

Wheat prices have been stymied by another year of huge global production. 2017 wasn’t without its highlights though: mainly opportunities created by dryness concerns in Western Canada and the U.S. Northern Plains. Winter, spring, and durum wheat prices all appreciated in July, with durum the last of the complex to lose its premiums. More specifically, we saw durum prices trading on the FarmLead Marketplace above $10 CAD / bushel through July, an obvious far-cry from where we’re sitting today.

The big factor again in 2017 for wheat markets was Russia. The latest report from the Russian Ag Ministry suggests total wheat production of 85.8 million tonnes. The USDA’s most recent estimate for Russia’s 2017/18 wheat crop was 83 million tonnes. Not only are they producing more grain, they’re also exporting more grain. They’ve become a staple for Middle East and North African customers, as well as some buyers in South East Asia.

Corn markets in 2017 was really characterized by another big year of production and government policies. The second-largest crop on record in the U.S. came in at 14.58 billion bushels for 2017. That number is down from the record crop of 15.15 billion bushels in the previous year, but it’s still enough to raise concerns about global supplies and prices for farmers.

Of course, the U.S. isn’t the only major producing region that has affected prices across the globe. The latest World Agicultural Supply and Demands Estimates report indicates about a 30.8 million-tonne drop in international corn production from 2016/17 to 2017/18. Though U.S. represents a large drop, we see production declines forecasted across South Africa, the Black Sea states, China, the EU, and Brazil. Only Argentina is signalling an increase year-over-year.

Corn prices followed wheat prices higher in the summer months, thanks also to the dryness concerns. However, it’s worth noting that we’re still hovering near record levels of production and ending stocks. Nearly half of all global grain production in 2017/18 was corn! Clearly, there isn’t going to a shortage of corn anytime soon.

There isn’t a shortage of soybeans either, thanks to record crops in Brazil and America in 2016/17. The carryout looks to be followed up by the second-largest crop ever in America and the potential for another huge crop in Brazil (its harvest starts in late January).

Though South American soybean sales by farmers are actually sitting behind where they were at this time a year ago. Despite this, Brazil will retain its title as top soybean exporter in 2017, with China doing more business on the southern side of the equator.

One positive though for U.S. soybeans is domestic demand, as the U.S. has put heavy import taxes on Argentine and Indonesian biodiesel imports, which are made from soy oil and palm oil, respectively. With biodiesel demand constant, the simple conclusion is that more American soybeans will need to be crushed to go into the biofuels market. This potentially opens the door for canola oil to fill the gaps where less soy oil will be available.

While that’s certainly bullish, the global canola/rapeseed balance sheet is the tightest it’s been in the past 7 years. However, the bearish factor is a record canola crop from Canada, and the strong likelihood that we’ll see record canola acres again in the spring of 2018 in the Great White North.

Oats prices improved slightly over the year but a surprisingly bigger and better Canadian crop has kept prices in check. For feed grains, there’s not much to say other than strong livestock prices and strong export volumes has helped fuel competition. This means that feed prices for wheat and barley are up about 10-15% compared to a year ago (that’s area-dependent though). Conversely, malt barley prices suck and despite the global balance sheet being the tightest its been in a few decades, it’s hard to expect to see $6 CAD / bushel, let alone $7 handles coming back.

Finally, pulse markets have taken the biggest hit in 2017. Just a few short years removed from seeing prices move 10-15% higher in just a week, the glory days are passed us. Nowhere is this more evident that supply has caught up to demand than in Indian government policies. Instead of importing, India is more interested in supporting domestic prices. As such, they haven’t extended any fumigation exemptions and have implemented 50% import taxes on peas, and 30% import taxes on both chickpeas and lentils.

While North American farmers aren’t huge exporters of chickpeas/garbanzos to India, the Asian country is pretty important for lentils and peas trade. Already, Black Sea pulses are trading at a discount to Canadian or American product. Thus, we expect a significant acreage reduction in both peas and lentils in Canada in 2018 (but more on that next week in our expectations for 2018).

See you in the new year!

‘This doesn’t make any sense:’ A wild week in the markets

Are Wheat Markets Poised for a Rebound? — Market Update With Chuck Penner