Before we begin to explain how blockchain may be a game changer for agricultural marketing let’s answer that question that is likely at the top of your mind.

“What the the heck is blockchain?”

According to the Harvard Business Review, it is “an open, distributed ledger that can record transactions between two parties efficiently and in a verifiable and permanent way.”

Personally, I like the definition by ZDNet, which explains the link between blockchain and crypto-currency Bitcoin:

Blockchain is an algorithm and distributed data structure for managing electronic cash without a central administrator among people who know nothing about one another. Originally designed for the crypto-currency Bitcoin, the blockchain architecture was driven by a radical rejection of at (government-guaranteed) money and bank-controlled payments. Blockchain is a special instance of Distributed Ledger Technologies (DLTs), almost all of which have emerged in Bitcoin’s wake.

Many people are following Bitcoin very closely as it surges to record highs with extreme volatility. It’s like a new gold rush, but not everyone is sold on the crypto-currency. Blockchain, however, is definitely looked upon as a push forward in accountability and transparency.

“Bitcoin the currency, I think, is going to go nowhere … the blockchain is a technology which we’ve been studying and yes it’s real.” —Jamie Dimon on CNBC

Since blockchain is a shared ledger of transactions, every new transaction is added to the chain. All of the existing shared data on the blockchain cannot be tampered with because the decentralized ledger is located on thousands of computers.

DTN recently published an article by Elaine Kub on the opportunity that blockchain could provide agricultural markets in the in the future. Kub is of the opinion that blockchain could revolutionize the way grain transactions happen. As she notes, an Australian company has already conducted the first-ever blockchain trade for wheat.

I chatted with Elaine Kub, author of “Mastering the Grain Markets: How Profits Are Really Made,” about how blockchain works, whether bitcoin is all it’s cracked up to be, and how blockchain could be used to create traceability in the agricultural markets. 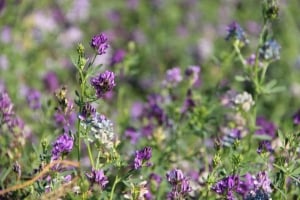 If there's one thing farmers should understand, it's biosecurity — and yet, somehow there are many who aren't taking the physical distancing protocol seriously. Wheat Pete, for one, is having none of it. Of course, the host of Wheat Pete's Word, Peter Johnson, only spend a little bit of time on that topic for this…Read more »

New (or No) Fanfare? — This Week in the Markets