With the ability to lift up to 300 kilograms into the air, the Drones4Agro quadcopter drone on display in the Multi Tool Trac exhibit at Agritechnica was much larger than the average drone we see on farms today.

But with that payload, it can also carry much more than the small camera that most drones carry.

As Paul van Ham explains to RealAg’s Shaun Haney in the interview below, the Dutch company’s drone can carry up to 250 litres of liquid — much larger than some other spraying drones we’ve profiled here on RealAgriculture (here and here.)

The liquid is applied using a 9 metre-wide boom flying less than 1 metre above the crop canopy. 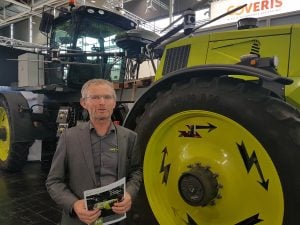 Van Ham says the drone can fly for up to an hour before docking at a ground station to recharge and refill, which takes 30 to 45 minutes. They foresee it operating in swarms with multiple units in the air.

He says they also see potential applications for the large drone in spot-applying nutrients and soil sampling.

Check out the video below for more, and stay tuned for an upcoming TechTour episode featuring the Multi Tool Trac electric tractor, on which the drone was perched during Agritechnica.