Fendt sees a future where 12 small robots the size of drink coolers will replace a tractor and eight-row planter for planting corn.

After completing the MARS (Mobile Agricultural Robot Swarms) project with Ulm University of Applied Sciences and funding from the European Union, Fendt and parent company AGCO have decided to take the research one step closer to commercialization.

The new robots, named ‘Xaver’ after former owner Xaver Fendt, were unveiled to the public for the first time at Agritechnica in Hanover, Germany. 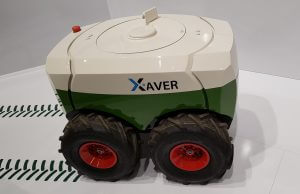 The fleet operates under a cloud-based system, which can plan, monitor, and document precise-planting of corn (right up to the position and sowing time of each kernel).

Using the OptiVisor algorithm, each machine is able to calculate optimal paths across a field and the time required to complete a project.

Powered by an approximately 400W electric motor, the robots weigh roughly 50 kilograms, applying a ground pressure of 200g/cm². Tank capacity is around 8kg, and it takes a single robot around one hour to cover 0.1 hectares, with a system of 6-12 covering 1 hectare in roughly the same amount of time.

The small Xaver machines dock to refill and recharge at a larger logistics unit, which is equipped with a generator. The logistics unit is also used to transport up to 12 small robots to the field.

“Because it’s a totally new product, we have to evaluate now where is the market volume and who can use this,” says Fendt’s Johannes Lehmann in this TechTour episode, noting they see fleet size varying according to farm size.

Lehmann says they see the price for a package of 12 Xaver robots being set relative to the price of a planter setup carrying out the same task.

RealAgriculture’s Kelvin Heppner caught up with Johannes Lehmann at Agritechnica, to talk about the Xaver fleet.

In the Dirt with Salford: Must-Have Tools for Planter Evaluation, Plus a Tillage To-Do List

Reviving the Concord brand with the 5250 air cart