Lawn mowing is a task that some people enjoy, but many would just as soon spend that time doing something else in summer. (Count me among the latter.)

The technology for autonomous mowing machines that stay within a wire perimeter has been around for a while, and sales of electric Roomba-like grass-cutters have surged in Western Europe in the last decade — all of which makes you wonder why we haven’t seen the same availability and adoption of consumer-friendly lawn robots in North America.

“We have, here in Europe, a large growth in this kind of machinery,” explains Oliver Weiss, who works in John Deere’s turf division in Germany, in our conversation below.

In addition to the timing savings, he notes the cost of electricity is also significantly lower than fuel.

While other companies, such as Husqvarna, have started selling a few small autonomous models in North America, they are nowhere near as common as in parts of Europe. Deere’s mowing robots are hard to find on this side of the Atlantic. 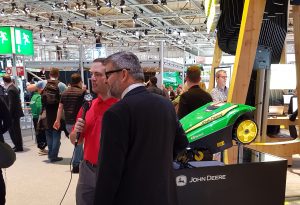 One of the factors is average yard size in North America is larger. Deere’s Tango E5 Series II mower, which has been on the market for four years in Germany, is designed to cover up to 2,200 square metres or 0.6 acres.

“John Deere is now investigating the market, and we know in the U.S. and in Canada, the areas are a little bit wider, but they are thinking about that and I believe in the next years John Deere will come with this product also to your country,” says Weiss, speaking with us at Agritechnica in Hanover, Germany.

Given the technology that exists in all new farm tractors, another question comes to mind: when will these autonomous mowers stay within GPS-defined areas, rather than requiring a buried boundary wire?

Weiss acknowledges Deere is fully capable of doing that, but says he doesn’t know. He doesn’t see Deere or their main competitors offering it anytime soon.

The Tango E5 Series II mower on display at Agritechnica can operate 24 hours per day, running for approximately an hour at a time before returning to its dock to re-charge its 25V lithium ion battery. The 54cm-wide machine cuts grass at heights ranging from 19-102 mm.