The Bank of Canada raised target rates this morning by 0.25 percent. The Canadian dollar (CAD) initially responded by falling over a half cent, but closed the day slightly higher.

While rate hike announcements tend to inspire a bullish dollar, what is often overlooked is what the market was expecting prior to the announcement. In this case there was around a 90 percent probability priced into the market that the Bank of Canada would hike interest rates. Today’s rate hike was not a surprise as recent economic data warranted it.

It was the Bank of Canada’s overall announcement — which flip-flopped from uncertainty in trade to a strengthening global economy — that delivered a somewhat bipolar tone, leading to the aforementioned volatility in the Dollar. 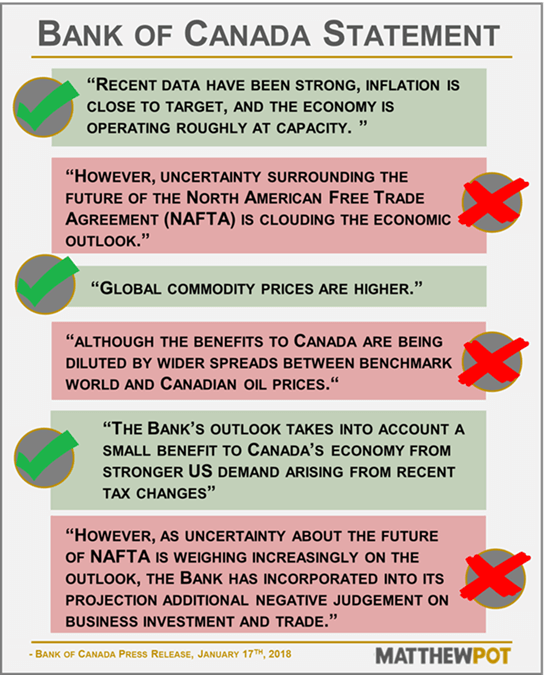 With the market already pricing in one or two more rate hikes in 2018, it will continue to position itself to changes in rate hike expectations, which will, in turn, directly effect the CAD/USD. With the Bank relying on data to make decisions, upcoming economic data will be important to watch.

There are two sides to the coin. If the North American Free Trade Agreement (NAFTA) becomes a serious threat, or is disbanded, this would cut back interest rate hike outlooks. On the other side of the coin, the cautious remarks around NAFTA in today’s statement also hint that if the negotiations do come together this will only mean more aggressive interest rate hikes in Canada.

We will have to keep an eye on economic reports outlining jobs, gross domestic product, inflation and retail sales, as these will no doubt directly affect grain prices.

Feeling Great Again? — This Week in the Grain Markets