After an event that featured congressmen, senators, the U.S. agriculture secretary, Canada’s minister of agriculture, and even the president of the United States, NAFTA renegotiation and the future of agricultural trade between Canada and the U.S. is still in limbo.

On Sunday, Canadian Agriculture Minister Lawrence MacAulay addressed the large crowd at the American Farm Bureau Federation’s annual convention in Nashville and spoke of the strong relationship between Canada and the United States in many things, including agricultural trade.

Maybe the best pop that MacAulay got from the crowd was his reference to Canada being a great exporter to the United States, which included the likes of Shania Twain.

The political appearances continued with U.S. Agriculture Secretary Sonny Perdue, who talked about the importance of NAFTA, but also said the U.S. is intending to find a better deal for farmers and America. Perdue described the NAFTA negotiations this way:

“To get a deal, we need all sides to seriously roll up their sleeves and get to work. We, the United States, have put a number of proposals on the table to modernize NAFTA, and critically for agriculture to address key sectors that were left out of that original agreements — specifically dairy and poultry tariffs in Canada. Now we need to ask our partners to the north, our negotiating partners, to step up, engage in meaningful conversation so we can get the deal done for them and for you.” 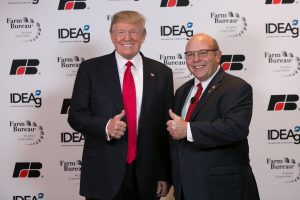 The headliner for the Farm Bureau convention was the 20 minute keynote by President Trump on Monday afternoon. He was the first president in 25 years to speak at the meeting and the largely Republican crowd enjoyed it very much.

Many attendees were looking for Trump to address NAFTA and provide some reassurance instead of the uncertainty he has created by often mentioning a withdrawal from the agreement if the United States does not get what it wants. He devoted only a few lines to the trade negotiation, talking about how Canada and Mexico are benefiting from the current agreement.

“To level the playing field for our great American exporters, our farmers and ranchers as well as our manufacturers, we’re reviewing all of our trade agreements to make sure that they are fair and reciprocal. On NAFTA, I am working very hard to get a better deal for our country and for our farmers and manufacturers. It’s under negotiation as we speak,” he said. “But think of it: When Mexico is making all of that money, when Canada is making all of that money, it is not that easy of a negotiation.”

There were many cheers and applause for Trump’s references to the flag, the anthem, tearing down regulations and making sure the rural America is not forgotten anymore. The president very quickly glazed over trade which left people no more confident heading into the round 6 negotiations January 23-28.

Although Trump skipped over any specific trade issues, such as dairy, MacAulay was asked about the elephant in the room.

“Looking at the world and looking at what other countries do in other commodities, there are always small priorities — small issues in every countries, like sugar in the U.S. — agriculture is a country issue. Everybody wants to make sure that they take care of their agriculture sector and that’s what we intend to do too.”

This sets the stage for round six of NAFTA negotiations, which will take place in Montreal January 23 to 28.

The clock is ticking on private plant breeding investment in Canada

Chinese drone manufacturer DJI is introducing a spraying model to North America, as it foresees a day when farmers use swarms of unmanned aerial vehicles (UAVs) to control weeds, diseases and other pests. The Agras MG-1 is an octocopter capable of carrying 2.5 gallons and covering 7 to 10 acres per hour, explains DJI's Jan…