Construction has started on a large pea processing plant in central Manitoba that’s designed to process more than 100,000 tonnes per year starting in 2019.

The new processing facility at Portage la Prairie will undoubtedly boost demand for peas on the eastern side of the prairies, however, there’s a big question that has yet to be answered: where will the supply come from?

Manitoba farmers only grew around 80,000 tonnes of peas in 2017, according to Statistics Canada. Going back to 2010, pea production in Manitoba has only exceeded 100,000 tonnes once, in 2016, when pea acres spiked to record levels across the prairies. To put these numbers in context, Saskatchewan and Alberta both grew around 2 million tonnes of peas in 2017 (see chart below.)

So peas will certainly be trucked to the new processing facility at Portage from the west, but freight costs will likely favour peas that are grown closer to the plant.

In this Pulse School video, Terry Buss of Manitoba Agriculture joins Kelvin Heppner to discuss the agronomics of expanding pea acreage on the eastern side of prairies, where soybean area has exploded in recent years. (continues below)

Buss says he believes there’s room to improve agronomic management of peas to stabilize yields and potentially grow pea area to 300,000 acres in Manitoba, which would be a nearly four-fold increase for Manitoba, but a drop in the bucket of pea production on the prairies.

“We don’t think (300,000) is an unreasonable number in the long-term,” says Buss. “We definitely have a feeling that we’re entering a new era with field peas. We have a sophisticated market here, with local demand for manufacturing and value-added. That ultimately trickles down and provides benefit for the grower.”

Of course the market will determine what is grown where, but from an agronomic perspective, what advice does he have for farmers on the eastern side of the prairies looking to supply this new processing demand?

First and foremost, Buss says field selection is critical. Many growers were disappointed by their pea yields in 2016, which resulted in a drop in acres in 2017.

“I think part of the reason that happened is people put field peas in fields that aren’t well-suited for them,” he says, noting it’s critical peas are planted in well-drained fields. “There are other things you can check, but frankly, if you have a problem with wet feet, field peas are going to struggle.”

“There are some basic fundamentals there. And oftentimes people say ‘we know those,’ and yet when I get called out to trouble situations, those are things that haven’t gone right,” he says.

Buss discusses the agronomic considerations and challenges for pushing pea acres higher in the above video (also available as a podcast), recorded at the Manitoba Agronomists Conference in mid-December. 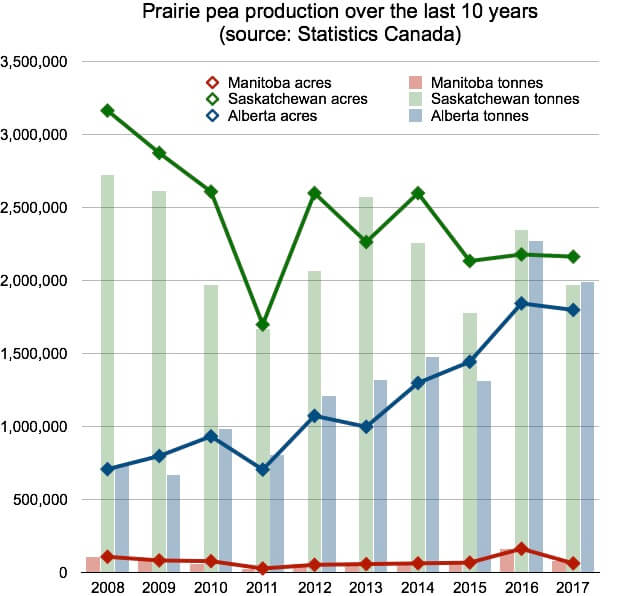 The Agronomists, Ep 99: Managing residue ahead of soybeans with Horst Bohner and Dr. Yvonne Lawley

How to measure soil health