Wednesday was a big day for economic news in both Canada and also for our friends south of the border, in the United States. Here at home, the market is digesting the most recent GDP data for November, while the U.S. Federal Open Market Committee made the decision to hold interest rates in the country.

Matthew Pot, with Grain Perspectives, says Canadian GDP was reported as expected with a 0.4% growth from October’s disappointingly flat growth.

“This gives the market some comfort that the Bank of Canada will continue on its current trek of hiking rates. The market is pricing in aggressive interest rates of one, two, or maybe even 3 more hikes in 2018 from the Bank of Canada,” he says. 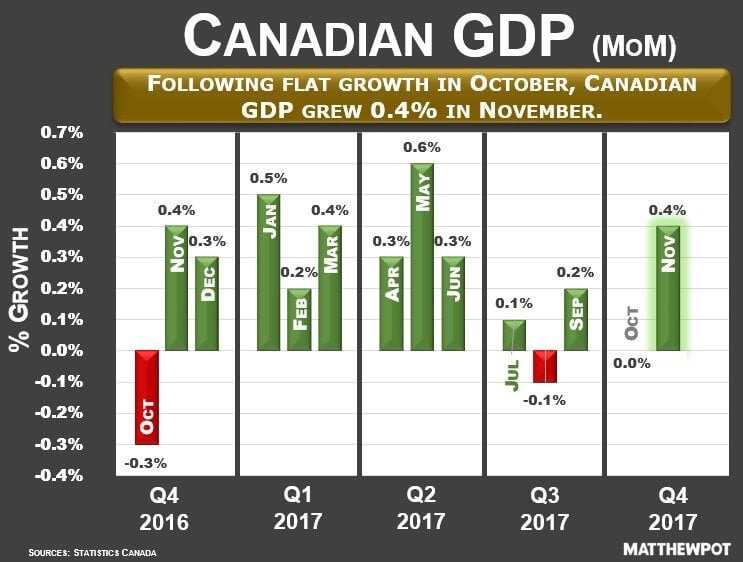 “The Canadian economy performed really well in November, with the manufacturing sector notably recording its largest monthly growth since 2014. The economy continues to converge towards full capacity, absorbing three rate increases by the Bank of Canada in the last six months.”

On the U.S. side,  interest rates held, but there is an expectation that they will increase in the next Federal Reserve meeting in March.

FCC’s JP Gervais described the US. economic situation the following way, “Meanwhile, the Central Bank in the U.S. is in a holding pattern, but maybe not for long. The biggest unknown factor for the Fed remains the speed at which wages are going to increase given the strength of the labour market and the implementation of tax cuts. Higher wages is what should push inflation upward and finally lead he Fed to increase interest rates in the next few months. This could bring back the Loonie closer to 80 cents.”

In terms of more economic news on its way there will be a heavy focus on the U.S. jobs number as an indicator of how the Trump job plan is rolling out.