Grain markets this week ended mostly in the red after a stronger performance at the beginning of the week. Traders took profits on the heels of some double-digit moves on the futures boards for most grain and oilseeds on Tuesday. Some geopolitical risk helped fuel the rally, but a “risk on” attitude hit the market on Wednesday as volatility ensued. Broader equity markets were hit pretty hard, with the Dow Jones in New York losing 1,000 points (about 4%) for the week, including a 650 point drop on Friday.

Soybean prices finished the week with a three-day selloff that pushed March prices back under $9.80 per bushel. However, earlier this week, March soybean prices hit their highest levels since early December, finishing off a big rally over the second half of the month. Clawing back into the history books, on the day of the World Agricultural Supply and Demand Estimates (WASDE) report release, March soybean prices fell to as low as $9.445 USD per bushel at the Chicago Board of Trade.

Markets have largely priced in an expected reduction to the Argentine soybean crop in next week’s WASDE report. Argentine weather forecasts include a bit of rain in the next 10 days. In addition, heavy Chinese buying of Brazilian crop has raised concerns about U.S. protein quality and future export prospects.

It remains to be seen if the USDA will hike its Brazilian production forecast and offset any possible reduction in Argentine output. Brazilian farmers have made more harvest progress on what looks to be a new production record. On Friday, AgRural hiked its projection for Brazil’s soybean production by another 2.2 million metric tonnes. The group now expects a record 116.2 MMT due to higher projected yields. This figure would blow past the 114.1 MMT posted during the 2016/17 harvest.

Canola prices followed soybean prices lower this week. But we can’t put all the blame on traders in Chicago, nor robust Chinese demand for Brazilian soybean crops. A multitude of factors are weighing on the canola complex, including large old crop supplies, a stronger Canadian Loonie, falling crush margins, and, of course, the prospect of record Canadian acres.

Agriculture Canada has forecasted an uptick in canola and wheat plantings as farmers shift away from pulse crops (as you’ve probably heard, heavy tariffs in India have made pulse crops a less attractive investment). AAFC has projected that canola acreage will increase year-over-year by 1 million acres to 24 million tonnes. In addition, they’ve pegged ending stocks of 2 million tonnes for this crop year and 2.25 million tonnes by the end of 2018/19 season.

The big news in corn this week all centred on South American production and yield expectations ahead of next week’s WASDE report. In addition, Brazil’s trade leaders said they shipped just over 3 million tonnes for the month of January — more than 100% higher than shipments in January 2017.

Meanwhile, we saw very positive U.S. export data this week, but it was not enough to cause a pop. The USDA reported total weekly exports of 1.851 million tonnes. That figure topped the high-end of trade estimates (1.5  million tonnes) and surpassed last week’s number by about 28%.

You could have just slept through this entire week if you’re thinking about buying or selling oats. Prices were very flat all week, with the March contract up just a half penny. The contract started the week at $2.67 and closed Friday at $2.675 per bushel.

The bigger news came in the spring wheat market, as prices slid by more than 2% in Minneapolis. Still, spring wheat is trading at far more than double oats futures prices, making it a more attractive crop to plant in the months ahead. We’re still looking for progress in China and the liberalization of trade between Canada and China. Given the expected rise in Chinese demand over the next decade, the elimination of tariffs is warranted on the crop.

Unfortunately, Australia dominates as the supplier of choice to China. We’re hoping to see a change in policy in the future, but it could take a while. Ultimately, speculating on China’s tariff policy shouldn’t be a primary factor in your 2018 planting decisions.

The issues with quality come at a time that supply isn’t expected to be robust. Wheat acres hit their lowest levels in more than 100 years as farmers turned to other cash crops, particularly cotton.

Ahead of the WASDE report on February 8th, the USDA says that global wheat inventory levels this year sit at a record 268 million metric tonnes. But the International Grains Council projects that stocks could soon go in reverse. That’s because global production is slated for a 2% drop in 2018/19.

Overall, we saw a lot of volatility in this week’s grain complex. Given the general low-price dynamic of the markets, we shouldn’t look at this as a negative, as the volatility provides us sellable opportunities. It’s tough to judge if it’s the right call to sell, but when we make the call to sell, we’re considering if there are stronger bullish or bearish influencers that will be driving markets forward.

We’re also extremely cognizant of the relativity of grain prices. This means recognizing where prices are today compared to where they were three, six, or even 12 months ago. Grain marketing isn’t easy, but clearing the noise, focusing on a few major factors, and preparing a plan will go a long way to making your grain profitable in 2018. 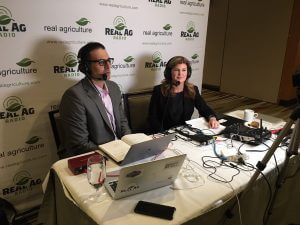 Possible Conservative leadership strategies and next priorities for the minority government

The Conservative Party of Canada is back to looking for a new leader just two years after Andrew Scheer stepped up. Now that the rules of engagement have been laid out, featuring some significant changes from the last leadership race, names are being added — and not added — to the list of contenders. Jeff…Read more »

Wheat prices jump into August — This week in the grain markets

Thinning out over Christmas — This week in the grain markets