Grain prices this week were relatively quiet as the complex digested another World Agricultural Supply and Demand Estimates (WASDE) report from the USDA that didn’t give much fodder to go off. According to the report, total South American soybean production is basically staying the same; U.S. corn exports were raised; and American soybean stocks ballooned thanks to lower exports.

For the week, soymeal was the big winner, up nearly 4%, thanks to concern over soybean production in Argentina (more on that later). Canola was the next closest, up 0.8% since last Friday (mainly because the Canadian dollar lost 1.5% to fall back below 80 cents USD). Chicago wheat also gained a bit, up 0.55%, with Kansas City hard red winter wheat futures up 0.5% (just 2 cents/bushel).

Soybeans also gained 0.5% for the week (despite some bearish domestic factors), while corn was able to squeak out a 0.15% gain, preserving its wins from last week. Hard red spring wheat prices in Minneapolis ended one-quarter of a cent lower than last Friday’s close. Oats was the biggest loser, down 0.4% for the week. 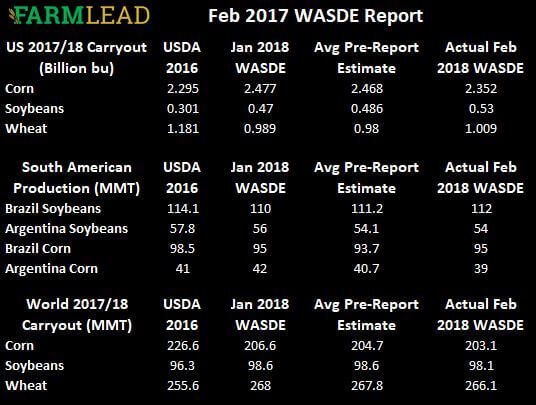 Before Thursday’s WASDE, StatsCan came out with their numbers for grain still left in the Canadian pipeline as of December 31, 2017. Generally speaking, there were a few surprises but the general theme of large grain supplies has been held up with another StatsCan report.

First things first, canola numbers were a bit big, at 14.15 million tonnes still left lying in both commercial and on-farm storage. This was less than the 14.3 million tonnes that were still expected, and so canola was able to close out in the green. Nonetheless, these canola stocks are still a new record 17% higher than the five-year average for this time of year, and 6% (or 762,000 tonnes) more than what was available as of December 31st in 2016.

Another notable was durum wheat, which saw total Canadian stocks as of December 3, 2017 at 4.83 million tonnes. This is 21% (1.32 million tonnes) less than what was available at the same time a year ago. The decline was seen in on-farm and commercial stocks, both of which were down 21% and 22%, respectively, year-over-year, to 4.13 million tonnes on the farm and 695,000 tonnes in commercial storage.

Rye stocks in Canada continue to balloon, with 309,000 tonnes available as of the end of December. This is 72% higher than the five-year average of 179,000 tonnes. Thus, be careful if you wish for $5 CAD/bushel handles — there’s enough supply to justify buyers not having to bid up for rye. For Canadian peas and lentils, inventories are unsurprisingly higher year-over-year, at 2.8 million and 2 million tonnes, respectively. These levels are both more than 20% above their five-year averages.

Coming back to the WASDE report, on the U.S. domestic wheat balance sheet, slower exports were to blame for American ending stocks climbing by 20 million bushels. From a global standpoint, wheat stocks were dropped by about 2 million tonnes on great trade activity from Russia, Argentina, and Canada.

There are some contrasting thoughts about the condition of the winter wheat crop in Russia especially, with one school saying the most recent blizzard there will help things, while the other idea is that it would be enough to recharge the soils after a dry autumn and early winter.

Corn prices did get a little bump on Thursday, thanks to U.S. corn exports being increased by 125 million bushels. This dropped ending stocks a bit (as shown in the chart below) but one could easily argue that some of this increased demand was already priced in. 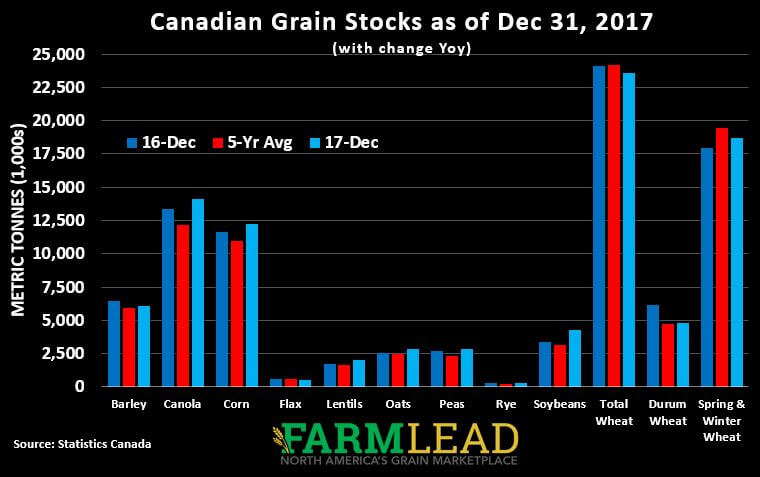 The USDA did not change its production figure for the Brazilian corn crop. The agency said that Brazil’s output would be 95 million tonnes.

The WASDE report first showed us that Argentine soybean production were dropped by 2 million tonnes to 54 million. This was in line with the market’s pre-report expectations. Separately, the Buenos Aires Grain Exchange dropped its production figure down to 50 million tonnes, 1 million lower than their previous estimate.

However, the USDA also raised Brazilian soybean production by 2 million tonnes to sit at 112 million tonnes. Thus, the 2 million tonne drop in Argentina was offset by this increase in Brazil. Sidenote: China’s soybean balance sheet was left alone, but monthly data indicates imports could be above the USDA’s estimated 97 million tonnes.

The key thing about the South American numbers is that it they don’t necessarily account for the weather over the past two weeks. And it’s been pretty dry in Argentina. Domestically, soymeal and soy oil prices in Argentina are starting to rally as the market continues to be concerned about production.

While last weekend everyone was watching the Super Bowl, with this week’s WASDE now out of the way, everyone will be watching Argentina’s rains. We’re at a fairly important point in the growing season of the corn and soybean crop and after a few weeks of dry conditions, a continuation of that would be fairly bullish.

Corn School: Looking for profit in the 2018 market

Corn School: A look at 2019 markets with Philip Shaw

Diverging demand and weather? — This week in the grain markets