Mole drainage is a concept for reducing waterlogging in heavy clay soils by creating underground tunnels for water, similar to tile drainage, but without the cost of pipe.

The subsurface drains are created using a single-shank plow with a cylindrical “torpedo” attached at the bottom, leaving a channel for water to flow along, generally at a depth of two to three feet.

The practice has been used on smaller fields in the United Kingdom and New Zealand for decades. Some farmers have experimented with it in North America as well, including in Western Canada in the ’80s, with little to no adoption.

However, with advancements in GPS elevation guidance and a larger plow design built for high horsepower tractors, a Manitoba-based manufacturer sees a new opportunity for mole drainage in North America. 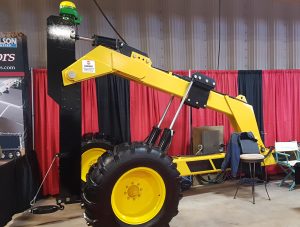 “We’ve designed this for our North American 500-horse tractors and set it up for GPS so we can pattern a field and get it to drain properly,” says Hugh Hunt in the video below. Hunt farms near Hallock, Minnesota, and is working with Dave’s Machine in getting the mole plow to market.

Initially, they’re focusing on the Red River Valley “because that’s where we have the tightest soil, and it’s where we’re typically the wettest. It’s where I farm and where I feel we really need subsurface drainage, but in talking growers coming by the booth, there are guys in Saskatchewan that want to do it,” he says.

Soil type will obviously be the determining factor, but one of the big questions is: how long do these mole channels stay open?

“We don’t know that yet here, because it’s a new concept,” says Hunt. “In Europe they’re seeing 10 to 15 year life out of these runs. I don’t expect we’ll see that type of life here, but if we can get 5 years out of it, I’m feeling pretty good with it because it’s low cost.”

A farmer would potentially re-plow each field every 5 to 10 years. Farmers in other parts of the world have also connected the mole drains to tile systems (for example, using tile mains at the headlands of fields when natural grade isn’t conducive for discharging water.)

Hunt notes the Dave’s Machine model on display at Ag Days is capable of working at depths up to five feet. With 120″ wheel centres, it’s also designed for row crop use.

Check out the video below for more on mole drainage with Hugh Hunt: