Grain markets this week took a bit of a geopolitical hit with a subdued approach to more talk of trade war.

Specifically, this week, U.S. President Donald Trump announced plans to place tariffs on about $50 billion worth of Chinese imports.

But China isn’t ready to be pushed around. On Friday, the country announced a list of roughly $3 billion worth of American goods that may be targeted in response, including steel, apples, and pork. It’s been speculated for the past month now that import taxes on soybeans are a potential target as well, but there’s nothing been done yet. The American agriculture industry is, however, the easiest target for China to go after.

On soybeans: prices in Chicago took more heat this week, due to rains in Argentina and the aforementioned potential for Chinese import taxes. The July contract lost 2% (21 cents) to close at just under $10.40 USD / bushel. The new crop November 2018 contract lost 14.5 cents to close at $10.265.

The Buenos Aires Grain Exchange (BAGE) reported this week that 80% of the Argentine soybean crop was rated poor or very poor. Usually, you see that sort of rating for the good-to-excellent column. The reason for the switch-around is that 90% of Argentina’s soybean fields see soil moisture levels categorized in the two lowest categories: poor or dry.

With this sort of rating downgrade, the BAGE dropped their estimate of the Argentine soybean harvest to 39.5 million tonnes. This is down 2.5 million tonnes from their previous estimate. AgResource is now suggesting that the final number could come in closer to 35 million tonnes.

Argentina is expected to get some moisture going forward, but it’s unlikely to make much of a difference to yield potential for soybeans, but may help the upcoming wheat crop. Northern Argentina will get some heavy but isolated rains this weekend while the rest of the country sees scattered showers next week. In the first week of April, dryness will return.

Steady rain is expected to continue to fall across much of Brazil, although the far eastern areas of the Brazilian corn belt are looking a bit drier over the next week. That being said, soil moisture conditions are good for the second corn crop’s early development.

July corn lost more than 5 cents since last Friday, down 1.3% for the week to $3.858 USD per bushel. The new crop 2018 contract fared a bit better, losing 4.5 cents, but did close below $4 for the first time in a month! One interesting, thing to note is the corn prices are still relatively low in relation to cattle prices. 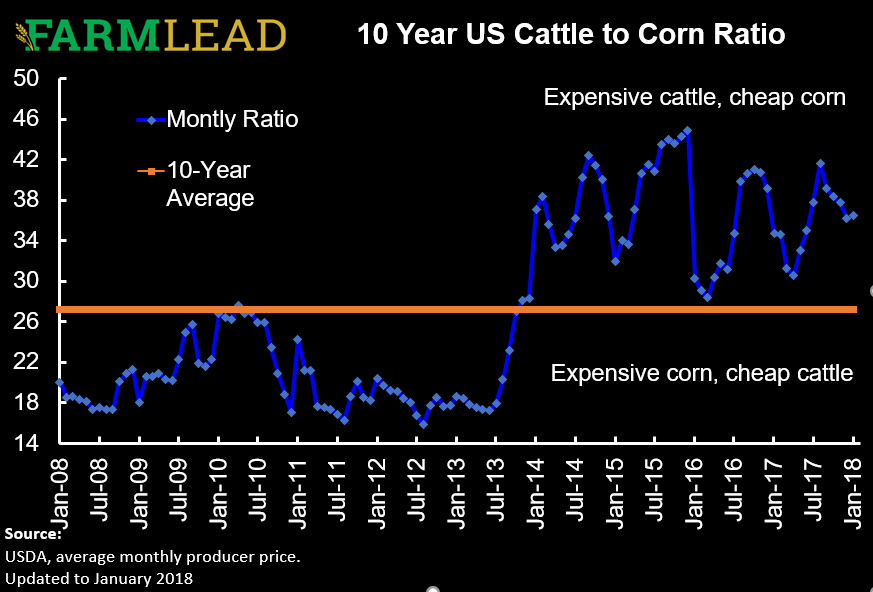 Wheat prices remain pressured as winter wheat crop conditions in the Black Sea remain relatively positive with good soil moisture health across the region. Further, rain is falling in the U.S. Southern Plains, with more in the forecast.

Kansas City winter wheat prices took a big hit as a result of these factors, plus subsequent funds selling out of their long positions. Old crop May 2018 K.C. futures lost 20 cents for the week to close below $4.80 USD per bushel, while new crop values on the December contract were down 14 cents to finish the week just below $5.40.

Chicago wheat was actually the best performing player in the wheat complex this week, only losing about 8 cents on the old crop contracts and 9.5 cents and new crop delivery periods. This meant the May contract closed at $4.60 while December closed just below $5.14.

Drills will be hitting the fields in a few weeks and with recent snowfall, the ideas of planting spring wheat instead of canola-on-canola is becoming a bit more attractive. Better soil moisture is certainly a factor in this, though profit margins are also clearly on the minds of many. Further, wheat exports out of Canada are starting to pick up a bit, whereas Canadian canola exports are tracking a bit behind last year’s pace (albeit still ahead of the three-year average).

There are three factors impacting canola prices right now. First, palm oil production has been strong this month in major producing areas in Asia, meaning canola oil has more competition. Second, canola crush plants in Western Canada have slowed down production because of lack of rail service (just by the numbers, every day that a plant is down, it’s about a $1.8 million loss in production). Third, the USDA attaché in Canada lowered its estimate of the 2018/19 canola crop in the Great White North to 20.5 million tonnes. This is 800,000 tonnes below the current estimate from Agriculture Canada. It also means that the 2017/18 record canola crop of 21.3 million tonnes won’t be eclipsed.

The downgrade comes as acres are still projected to be a record 24 million. The primary factor influencing the USDA’s attaché’s downgrade is the low subsoil moisture levels across the Canadian Prairies going into the planting season. Granted there has been some decent snowfall recently, it doesn’t all translate into completely recharging last year’s parched soils in many parts of Western Canada.

Overall though, the prices for corn, soybeans, winter wheat, and canola are still among the best they’ve been in a year. Don’t believe me? Look at a chart over the past 18 months to gain some relative perspective. And while the coffee row talk may be centred around how much grain prices have fallen in the past 2-3 weeks, they’re still pretty darn good.