Fungicide can be added to the list of crop inputs farmers can selectively apply using precision agriculture tools, targeting relevant areas within a field while avoiding patches where treatment isn’t justified.

Using satellite imagery to assess biomass density (a risk factor in sclerotinia), fields are broken down into zones based on disease risk. Farmers and agronomists can review and adjust the risk threshold and coverage areas before transferring the prescription data into existing sprayer rate controllers, says Bayer. 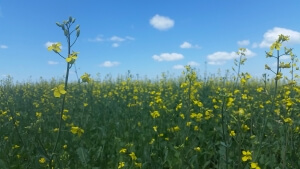 “It allows you to selectively protect the highest production zones of your canola crop, and treat them with fungicide against sclerotinia. It also helps you avoid treating those areas that don’t have an economic or agronomic benefit from fungicide,” explains Warren Bills, who heads up business development for Bayer Digital Farming in Canada, in the interview below.

The company has been testing the technology in Western Canada for three years, culminating with testing on 275,000 acres on the Prairies in 2017.

With the number of imaging satellites circling the planet growing rapidly, Bills says it’s becoming much easier to get cloud-free images during the critical window leading up to fungicide application.

He notes they are testing the technology with other crops and disease scenarios.

“Some diseases aren’t biomass driven, which is what we’re measuring with this current technology, but down the road for Bayer Digital Farming, we do believe there will be other combinations of crops and diseases where this would be well-suited,” he explains.

The fungicide mapping program will likely represent the first encounter for many farmers with Bayer’s digital agriculture business in Canada.

“It’s really our first product that we’re taking to market, and we’re excited because of that,” says Bills. “We have some other products in the pipeline that I think over the next 12 to 24 months will be rolled out, but this one just seemed to really solve a problem and provide a great solution. Based on the feedback from our testing growers, we’re ready to go.”

The launch of Zone Spray by Bayer Digital Farming comes as Bayer awaits approval of its acquisition of Monsanto, including Monsanto’s digital agriculture subsidiary, The Climate Corporation. The European Commission is expected to issue a key decision on the Bayer-Monsanto deal by April 5th.

For those who love soil, there's nothing quite so painful as driving along a country road in winter, and seeing topsoil smeared along the snow banks. "Snirt" or "snoil", depending on who you ask, is valuable top soil that's been picked up by wind and shifted in to ditches, approaches, or even neighbouring fields. In…