While it stands to reason that Canadians may have become slightly jaded after a wide-spread price-fixing scandal was revealed late last year, a new study from Dalhousie University’s Faculty of Management confirms it.

The report, released today, finds that consumers are less likely to trust national food retailers than they were in November 2017, before Loblaws admitted it had been involved in a bread price-fixing scheme for 14 years.

“We wanted to just get a sense from Canadian consumers whether they gave their food retailers social license, which essentially means ‘do they approve of the way they do business?’,” explains Vivian Howard, lead researcher in the interview below.

Dalhousie’s management faculty published its first Social License to Operate report in November 2017. It measured which retailers and government departments Canadians think are the most trustworthy, socially responsible, environmentally friendly, and ethical in four sectors: transportation providers, retailers in the food and clothing sectors, and government departments. The researchers plan to do a series of follow-up supplements for each sector.

“We wanted to see if there had been any changes in consumer perception, given the recent media coverage of bread price-fixing,” says Howard. In December 2017, Loblaws publicly admitted to participating in a bread price-fixing scheme following an investigation by the Canadian Competition Bureau. “We found that levels of consumer trust for Loblaws have declined since our study in November.”

The decline in trust could have serious effects. “Social License to Operate is becoming a significant issue in the food industry,” says Sylvain Charlebois, food industry professor and dean of Dalhousie’s Faculty of Management. “Companies have to think about how they are going to deliver on their ethical and sustainability promises.”

Listen to lead researcher Vivian Howard break down their findings on Canadians’ trust in food retailers in this conversation with RealAg’s Shaun Haney: 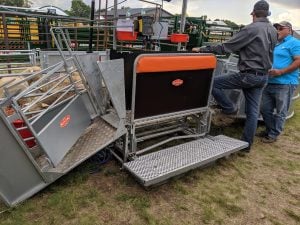 Assaults on Local Food Get Under My Skin — Especially at Thanksgiving