Grain markets finished the end of March and the calendar quarter on a bit of a high as the USDA provided a slightly bullish catalyst on the last day of trading. This could provide some active, but volatile, trading in the first week of April.

Until Thursday, soybean prices and corn prices headed lower as funds dumped their long positions. But on Thursday, the USDA published its quarterly stocks and prospective plantings report, including a market surprise — 2018 corn and soybean acreage numbers are lower than the average pre-report estimate.

For the first time since 1983, soybean acres are projected higher than corn acres. That said, soybean prices rallied after acreage estimates came in well short of average trade estimates. The plantings report offset any concerns about rising soybean stocks. Also notable are spring wheat acres increasing significantly, while U.S. canola acres are expected to hit a new record in 2018.

Here’s a breakdown of the USDA’s acreage estimates for U.S. major crops and how they compared to last year and the pre-report estimates: 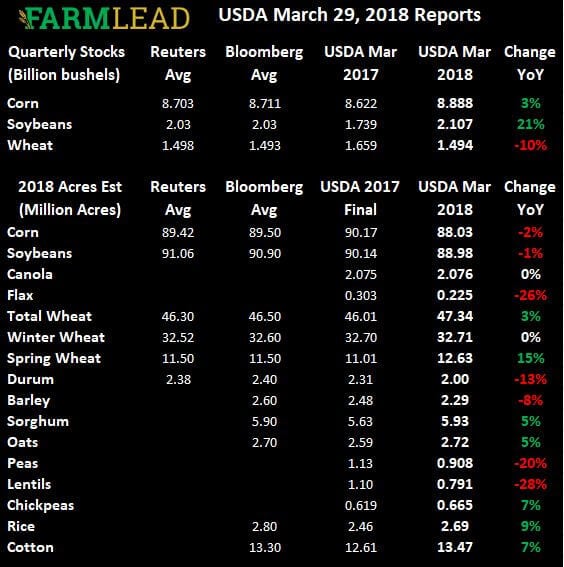 Since it’s all the buzz right now in grain markets, let’s come back to soybeans.

The harvest in Brazil continues to cruise along with decent weather conditions. Harvest is 73% complete, down from the five-year average of 77%, and 82% at this point last year. Within the next week to ten days, the harvest should be finished in Mato Grosso, Parana, and Goias (the three most abundant soybean producing states in Argentina).

Higher yields in some fringe areas could potentially push the final soybean number in Brazil higher. Currently, AgroConsult has the highest estimate at nearly 119 million tonnes, whereas CONAB is expected to raise their estimate above 114 million tonnes with their next report. Currently, the USDA is sitting at 113 million tonnes.

The Chinese are also noticing that Brazil is producing more beans. In February, US soybean shipments to China were 24% year-over-year. Comparably, Brazil’s were up 154%! If we’re honest though, U.S. soybean exports to China still totalled 3.34 million tonnes in February, whereas Brazil’s sat at 1.75 million tonnes. It’s not necessarily the absolute number that interests us, but the trends. The U.S. exports about two-thirds of the soybeans that it produces to China, where it’s closer to 74% for Brazil.

It’s up in the air if the trend will continue or not. The combination of strong Chinese demand, higher soybean prices on the futures board in Chicago, and a weaker Brazil Real (their currency), soybean prices at Brazil ports hit their highest level in 18 months last week! Currently, Brazilian soybean prices are $11 USD /tonne cheaper than U.S. Gulf of Mexico soybean prices.

While we’ve been pretty heavily focused on the weather on Argentina and Brazil the past two months, North American weather is definitely on the radar now. Heading into April, the mindset is quickly turning over to planting. In the U.S., April’s weather is looking fairly volatile with a bit more rain and snow in the forecast.

In the eastern Corn Belt, there is plenty of rain expected through mid-April, with winter storms not yet out of the question. In the U.S. Plains and western Corn Belt, below-average rainfall and some colder temperatures are in the forecast, which supports some bullish thoughts for grain prices.

In Canada, Environment Canada is expecting a slow thaw over the next 3-4 weeks. AccuWeather is saying that the Canadian Prairies could start to see some above-average temperatures in May, but normal rainfall should help drier areas in the southern half of the region. Worth noting is that flooding is less of a risk this year in many parts of Western Canada. In Eastern Canada, above average temperatures are expected to come about in May, but there are certainly some wetter conditions in the mix until then.

Coming back to South America, the weather has done its damage. We’re now seeing some estimates for Argentina’s soybean crop of under 38 million tonnes, and corn production under 30 million tonnes (the USDA is currently forecasting 47 million tonnes of soybeans and 34 million of corn). This in mind, there are some light showers in Argentina’s main production regions, but the first week of April is expected to be pretty dry still.

Overall, there are certainly a few more bullish variables for the likes of corn, soybeans, and canola. And while wheat prices have taken a bit of a hit, we have to remind readers that there is still a lot of grain in the market. With planting season nearing though, it’s hard to keep the optimism away as acres are turned!