When you cross the Canada/U.S. border headed south, the landscape is the same, the time zone is the same, but the economics of dairy are very different.

Canadians in agriculture are familiar with our domestic supply management system that aims to match supply of dairy products to demand. This control of supply through a quota system intends to stabilize pricing at the farm gate.

In the United States, dairy products are sold on the open market where supply is neither controlled or manipulated by a larger body. Dairy farmers in the U.S. rely on strong domestic consumption and export market growth to keep dairy demand strong as supply increases. However, globally, milk prices have not been above cost of production and the U.S. dairy industry has not been able to avoid this negative margin either.

And the results from a recent poll by Farm Journal’s MILK Magazine are staggering.

Out of 70 producers with 500 cows or more (average was 1,200 head), a large majority said they can only survive financially for another three years or less, explains MILK’s Anna-Lisa Laca in the interview below. 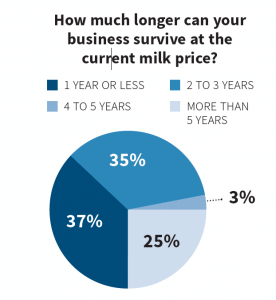 “This is a reflection of the slow grind of prices in the U.S. for milk, rising cost of labour and feed costs,” says Laca.

For example, according to MILK Magazine’s Jim Dickrell, feed costs jumped 40 cents/cwt of milk sold in March due to higher prices for corn, soybean meal and cotton seed.

SEE MORE ON THE US DAIRY SURVEY

As American farmers look for financial support through changes to the government’s margin protection program, Canadian dairy farmers use the U.S. example as justification for why supply management works for dairy farmers and Canadians as a whole.

In the NAFTA talks, U.S. dairy farmers have looked to opening up the Canadian market as a way to increase export demand. 68 U.S. lawmakers signed a letter this week saying Canada’s “abusive” dairy policies must be addressed through NAFTA negotiations. However, Canadian negotiators have maintained that the U.S. can gain access to the Canadian market through CPTPP, as the U.S. negotiated before exiting the agreement.