13 companies that supply equipment manufacturers with components for their cabs have partnered on a project in Europe to develop what they see as the cab of the future.

The CAB Concept Cluster unveiled its “Smart Cab” and caught the attention of machinery engineers at Agritechnica in Hanover, Germany, back in November.

A multifunctional cabin for self-propelled vehicles, such as combines and sprayers, the Smart Cab is equipped with high-tech sensors, screens, and lights — all in a design that’s meant to be adaptable for different machines and tasks.

“The CAB Concept Cluster was founded in 2014 as a cooperation of OEM suppliers just to show our OEMs the benefit of doing projects together and doing the best systems integration,” explains Alexandra Herrmann of Fritzmeier, one of the partners in the project, in the video below.

To start, they wanted a modular design, to save manufacturers’ time and cost when adding to or modifying the cab. “There are different functions and innovations you can integrate, which you can flexibly put together,” she explains.

Their second priority was making a cab capable of communicating with multiple machines and systems — what they describe as x2x-usability. As technology advances, the cab is designed to be flexible for adding functions and in how it communicates with the driver and other machines, says Herrmann.

Third, the cab was designed to be “smart farming-ready,” where the cab is ready for OEMs to integrate their own functions and apps for collecting, processing and transmitting data. 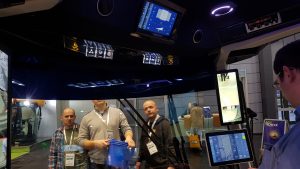 Beyond these three priority areas, the cab has the latest features for driver comfort, as well as various cameras and sensors to improve visibility and safety. For example, an eye-tracking camera made by HELLA follows the driver’s line of sight and dims the non-observed surroundings.

“On the one hand, the cluster partners want to present innovations that meet future demands and expectations of the market and generate high levels of customer benefit,” says Mathias Berger of Bosch, another one of the partners in the project. “On the other hand, users are able to choose precisely those elements that are suited to their needs.”

Check out the interview with Alexandra Herrmann for more on the Smart Cab design:

Agritechnica 2015: Lamborghini Tractors Aim to Live Up to Their Name

From sprayer to spreader in 60 seconds — Stara’s Imperador 3.0

Farmers looking to prepare for seeding using lower horsepower requirements can look no further than the Bednar Swifterdisc XO 8000F. Rene Van Geerenstein, with Pentagon Farm Centre, introduced Bednar's 8000F at Agri-Trade 2022, explaining its main purposes is as a secondary tillage unit. He says it's not used to break ground, but instead is intended…