The third year of Monsanto BioAg’s BioAdvantage Trials (BAT) wrapped up with a morning event that had co-operators, agronomists, and reps feeling optimistic for the growing season to come. The event was held in Saskatoon, the home of partner brand Novozymes’ headquarters and a hub for Western Canadian Ag. The event would update attendees on the year’s results and the future of biologicals in agriculture.

Regional Sales Manager Kevin Baumann was the first to take the stage to greet attendees. As folks settled in, Kevin set the tone for the event by welcoming and thanking the BAT co-operators who made the 2017 trials possible.

Shortly thereafter, Allison Ewen and Nicole Labbie – both BioAg Sales Representatives – took to the podium to debrief on the year.

“It’s been great to work closely with growers this year,” Nicole noted, “Seeing how our products can make a difference to their farm has been so rewarding.”

Technical Agronomist Jon Treloar stepped to the podium to deliver a summary of the third and most successful year of the BAT program.

“It really has been a team effort,” Jon said, acknowledging the work behind the Individual Plot Yield Report map that houses the 2017 results. “There were a few raised eyebrows at the beginning, but once we started to see the wins and how the data comes together…I think everyone can see the value in this.”

Before going into detail about results from the year, Jon briefly caught the room up to speed on the state of biologicals in agriculture, and where the industry is headed.

“Soil diversity has become a critical indicator of soil health,” said Jon, an exciting development that signifies a shift in agriculture toward embracing biological products. Jon continued by summing up the takeaway for farmers for the 2018 growing season; “It’s about introducing more beneficial organisms into the soil to increase yield potential.”

JumpStart® trials, which also yielded successful results, were structured to demonstrate the performance advantage versus untreated seed. Flax crops treated with JumpStart® finished the year with an average 1.8 bu/ac yield advantage over untreated flax, with a 78% win rate. Where the product really stood out was on the less productive land on Saskatchewan farms near Ceylon, Landis and Vibank. The product appeared to help flax crops that were underutilizing the few nutrients in the soil by increasing nutrient absorption, boosting yield by an average of 2 bu/ac. Next, Jon pulled up the data from QuickRoots® trials that took place.

“We put QuickRoots® out in the field in a pretty big way,” Jon said as he took guests through the extensive data resulting from canola, wheat, soybean, and corn trials. “QuickRoots® is composed of two biologicals; a bacteria and a fungus. They work together to free up soil nutrients, particularly in the organic fraction of the soil.”

Some of the most impressive results came from the canola trials, something of a surprise from a segment of the market that has been slower to adopt biological solutions. BioAg has identified a major opportunity for canola growers when combining JumpStart® with QuickRoots®, which together performed with an average 1.7 bu/ac advantage over canola treated with JumpStart® alone. Compared to untreated crops, the combo averaged a 5.1 bu/ac advantage!

As Jon wrapped up the presentation, the theme for the day seemed to be clear: optimism for 2018.

You can review the 2017 and previous years BioAdvantage Trial results on the Monsanto BioAg Canada website. 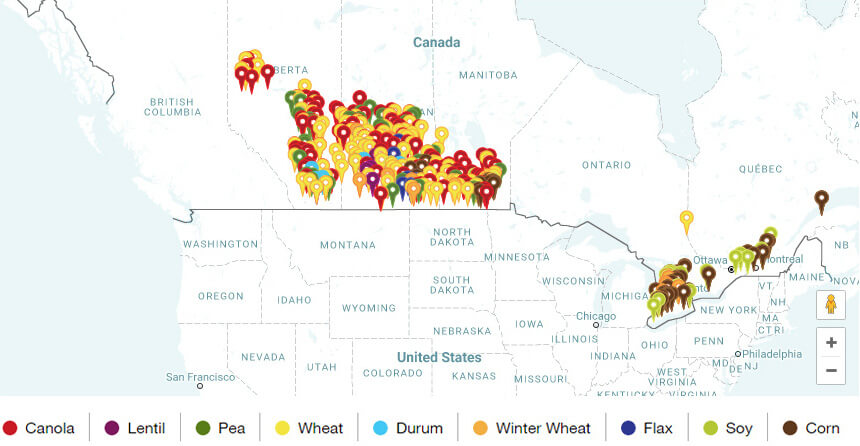 Soybean School West: What Fall Scouting Can Teach You, Plus Row Width vs. Solid Seeding Decisions

The variety and maturity group selections soybean growers make can have significant impact on how a variety develops throughout the season and its final yield. On this episode of the RealAgriculture Soybean School, PRIDE Seed agronomist Matt Chapple looks at how two varieties with different maturity ratings perform in side-by-side plots under the same growing…