Well, there is good scientific evidence that the composition of milk from cows fed dry hay or fresh forage is higher in omega-3 fatty acids versus cows fed ensiled feed. But, does the difference have a significant impact on our health? And is it the organic production or the grass that makes the difference? What does “grass-fed” even mean?

Let’s unpack this one.

Organic Valley, the company making the “more nutritious” claim, has a stunningly beautiful website resplendent in green grass and Jersey cows grazing. Which, good for them, but it’s April and there’s still snow in the tree line here. What happens to “grass-fed” cows in the winter?

Omega-3s are polyunsaturated fatty acids that include Alpha Linolenic Acid (ALA), found primarily in leafy green vegetables, grass, soy, nuts, seeds, and other plant-based foods. Health Canada recommends 1.1-1.6 grams of ALA each day. Omega-3s are also present in cold water fatty fish, as docosahexaenoic acid (DHA) and eicosapentaenoic acid (EPA).
Turns out, the term grass-fed can refer to either cows eating fresh pasture (most often alfalfa-based) OR dry hay (again, likely alfalfa-based, not grass). Grass-fed, in practice, means non-silage-fed. Concentrates are also frowned upon and many are prohibited (see below for a list). The benefit of the higher omega-3 content is derived from the non-ensiled feed (not an organic production method, it should be noted).

In Canada, there is currently no regulation or standard regarding grass-fed dairy. Instead, companies and organizations are free to develop in-house protocols to guide those interested in or already producing the product. Dairy Farmers of Ontario has developed a draft protocol, and is working towards finalizing how to authenticate/audit the production.

You’d think that’d be as easy as testing the milk, given the claim that the end-product is more nutritious, but it turns out that the differences in the milk aren’t consistently distinguishable.

Art Hill, professor of food science at the University of Guelph, says that preliminary research into using biomarkers to validate cows on a grass-fed protocol didn’t produce the hoped-for results.

“There needs to be a relatively easy way to verify the end product through biomarkers, but it looks like we will have to use an audit system (for verification),” Hill says. The biomarker route has potential, he says, but with current testing protocols there’s not enough statistical vigour to discriminate between grass-fed and non-grass fed milk.

Part of that comes down to the changing seasons. Hill explains that there are dairy producers now in Ontario who self-identify as producing grass-fed milk. Using that milk as a comparison, Hill says that, during the summer months, many cows — under the protocol and not — will be turned out to pasture. “Conventional” milk and grass-fed milk aren’t easily distinguishable from each other during this time.

There is also the concern for the cattle’s health. Most protocols do make a provision for body weight of the cows, Hill says, and that’s key. “Dry hay quality can be so variable year-to-year, and can’t necessarily support the demands of a lactating cow. Cows can’t always consumer enough dry hay to meet their energy and protein requirements,” he says. 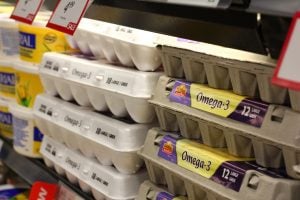 And so what about a health claim? In Canada, health claims are regulated by the federal government. A food or food ingredient can’t make a health claim, such as “oat fibre helps lower cholesterol,” without “scientific evidence to substantiate a food health claim prior to its use,” according to Health Canada. Health Canada’s website also states: “(A health claim) must be truthful and not misleading according to Subsection 5(1) of the Food and Drugs Act (FDA). In regards to omega-3s, nutrient content claims are not permitted for total polyunsaturates or monounsaturates, nor may claims be made about individual fatty acids such as linoleic acid.

Grass-fed milk carries no such health claim, at this time.

The bottom line: using the term grass-fed to describe dairy infers a multitude of benefits that are technically true, but a real stretch, in practical terms. Upon digging a little deeper, grass-fed really means silage- and concentrate-free, for reasons that aren’t entirely clear, and carries more feel-good connotations than actual, measurable differences in the milk.

Is milk produced from dry hay and pasture more nutritious? Well, in terms of fatty acid composition, yes, it’s an improved ratio of omega 3 to omega 6. But it begs the question — if more unsaturated fat in milk is so much better, is conventional dairy not that good for you? It would seem this marketing ploy only works if that’s the case, and that has some pretty negative implications for beleaguered fluid milk consumption.

Controlling leafy spurge one flock at a time