Grain markets were volatile this week with prices flip-flopping on what was more concerning — geopolitical risk or weather. Much less concerning were most of the largely market-anticipated USDA numbers.

Some notable data-points from this week’s WASDE (World Agricultural Supply and Demands Estimates): 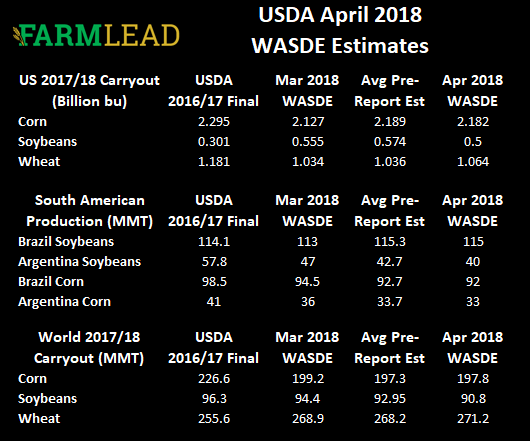 On the weather front down in Brazil, things are still in a pretty decent position, with the soybean harvest 85% complete (it was 89% by this time a year ago). There are also suggestions of higher soybean acres in the likes of North Dakota if it stays cold there.

The most interesting thing we’ve seen in the past two days, however, was the announcement of U.S. soybeans being exported to Argentina. This is pretty significant as it signals one of two things: either the Argentine soybean crop is worse than we estimated or some savvy traders are arbitraging the heck out of the market.

Soybean sales last week totalled 55.5 million bushels (or 1.51 million tonnes), according to the USDA. However, the bullish party was reined in by actual shipments coming in at just 15.4 million bushels (or 419,000 tonnes). Cumulative shipments are now tracking 13% behind that of a year ago. The USDA, as of this week’s WASDE report, says that U.S. soybean exports should be 5% lower than 2016/17.

AgResource reports that “Northern Brazil corn growing weather remains optimal.” While there is more talk about concern for southern Brazilian corn-growing areas, rainfall is about average thus far. To make trend yield, the area will need another three to five inches of rain in the next six weeks.

Meanwhile, cumulative U.S. corn shipments are sitting 21% behind what had been shipped out at this time back in 2016/17. Compare this to the USDA’s full-year target of U.S. corn exports falling just 3% year-over-year.

That being said, corn prices lost 2.5 cents USD / bushel for the week on the July contract to close at $3.945, while the December new crop corn contract dropped 1.7 cents to close at nearly $4.11.

For U.S. wheat, last week’s shipments totalled 16 million bushels (or 435,500 tonnes). This puts cumulative U.S. wheat exports at 10% behind this time in 2016/17. There are about two months left before new crop U.S. winter wheat supplies hit the market.

U.S. President Trump has asked his people to look into the Trans Pacific Partnership (now the CPTPP) again, specifically asking for them to find out what it would take for America to get back in. If that were to happen, it would likely undo some of the benefits that Australia and Canada have seen. Specifically, U.S. wheat may become the go-to option for Japan again, over Canadian wheat or Australian options.

Minneapolis hard red spring wheat prices pushed higher this week though as ongoing weather concerns about getting the crop planted in time is becoming more prevalent. The old crop July 2018 contract gained nearly a dime to close at just under $6.30 USD / bushel. The new crop December 2018 contract closed at $6.40 USD / bushel, up about 6 cents for the week, or just under 1%.

On the Chinese-U.S. trade front, President Trump has also said that he’s looking to put more pressure on China. CNGOIC notes that if China puts the 25% import tax on U.S. soybeans, they think the People’s Republic will have a shortfall of 20 million tonnes. As a result, China’s soybean and soymeal stocks (approximately 26.5 million tonnes and 6.5 million tonnes, respectively) would be tapped into. But they also admit that they would look to source European soybeans, soymeal, rapeseed, and rapeseed meal.

Will last week’s run up in canola prices be enough though to push canola acres to a record 24 million? Or will the weather limit the real number of acres? Usually, at this time of year, you only have to worry about Mother Nature as the major determinant in your final acreage intentions. This year though, geopolitical risk is trying to neck out the weather as the horse to bet on for the direction of grain prices.

The Week in Markets — We’re Talking Currency and Oil!