Marketing and farming go hand in hand, says UK communications specialist Simon Haley. In a swing through Ontario that starts later this week, he’ll be urging farmers to use their intrinsic marketing skills to get back in touch with consumers.

“Farming is where marketing started,” says Haley. But over the years – as nations became more urban than rural and their dynamics changed appreciably – things went haywire. Consumers started losing sight of farmers. And unfortunately, farmers lost sight of consumers, too. Even though marketing is an intrinsic part of farming, farmers failed to market that most basic feature: themselves.

Haley’s firm Social Jungle gives communications and business advice to major UK farming companies and groups such as the National Farmers Union. Most recently, with input from the NFU’s social media advisor, he ran a week-long (!) communications workshop for more than 300 union members, whom he describes as keen to re-set the tone.

“Farming’s voice got weak,” he says. “By not having a strong voice, we’ve let others fill the vacuum. Shying away from telling our own story has allowed others, like activists, to come at it with a more coordinated approach, so we’ve become reactive. By the time farming stands up, we’re already on our back foot.” 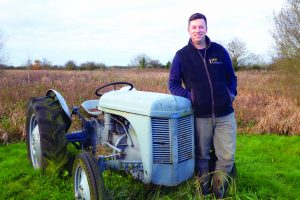 In Ontario, Haley will be sharing his thoughts about communicating with consumers at the Farm and Food Care annual general meeting. The promotion for his talk says he will “delve into the rise of special interest groups (on issues such as animal welfare, veganism, GMOs) and show how ignoring this militant voice in previous years contributed to societal change and a defensive strategy for engaging with consumers by UK farmers.”

It continues: “Now, through changing food values and embracing the trends of the millennial generation, farmers and those working in agriculture are telling their stories louder, better and with greater results.”

One of those trends is social media. Haley stresses that it’s a complement to a farm’s marketing and communications strategy, not a strategy unto itself. He says social media is good for making introductions, direct conversations and getting leads, but not so much for making sales or changing minds.

“That comes after people know who you are,” he says. “But first, you need to make the introduction.”

And, he says, better yet if you are working jointly with others, with prescribed messages. Farming is complex and complicated – “It’s not a simple profession,” says Haley — and what farmers consider common knowledge is far beyond the public’s understanding of agriculture.

So he suggests the agriculture sector as a whole decide what messages it wants to put forward (safety, sustainability, transparency and affordability, among them) and work from that common position. It’s important for individual farmers to present themselves online, as a get-to-know-you exercise. But going deeper and delving into actual advocacy — taking a position, righting a wrong, explaining something that’s suddenly become important to consumers — requires a coordinated effort by the ag sector for maximum effectiveness, he says.

“Messages to consumers should be deeper than ‘Have you thanked a farmer today?’” he says. “Dentists, bin men [garbage collectors], they could all say the same thing. Consumers want more from farmers than ‘Say thanks to us’.”

The Futility of Demanding Respect

In the UK, an effective approach to consumer connectivity has been the Open Farm Sunday program. It’s a bit like the popular Breakfast on the Farm program, where an individual farm hosts the public for a morning meal, except Open Farm Sunday is country-wide initiative.

Since the first Open Farm Sunday in 2006, more than 1,500 UK farmers have opened their gates and welcomed people onto their farm for one Sunday each year.

For others who can’t get to a farm, the media, social and otherwise, takes them there.

For example, BBC’s Countryfile program is an hour dedicated to ag and rural matters every Sunday night. It draws a whopping 8.5 million viewers per episode.

As well, a slick Twitter account and website called Farmers of the UK hosts blogs from different farmers and rural businesses each week who want to connect with consumers. It uses the hashtag #aweekinyourwellies to promote content.

For school kids in particular, there’s the social media program Facetime A Farmer, an initiative started by a Cambridge, England arable farmer, to take the farm into the classroom.

“That’s one thing about using social media,” says Haley. “For virtual visitors there are no geographic barriers, no staffing required, no cross contamination from one farm to another or from farm to farm.”

But regardless of the medium, he urges farmers communicating broadly to use terminology that promotes discussion, not confusion.

“Agriculture loves acronyms and terms that don’t mean anything to the general public,” he says. “Use basic language. That has broad appeal.”

What’s Hot at Crop Week and the Crop Production Show

Evidence Helps Save Environment — And Farming — From Disaster

“Just Trust Me” Didn’t Work for Science & Won’t for Farmers, Either

Feds Deserve Kudos for New Research Facility, but Who Will Staff It?