The first benchmark study of the condition of culled dairy cows in Canada shows many animals in less than optimal condition are transported to auction in Ontario, and sold at discounted prices.

The study, by a University of Guelph research team, involved 4,460 cows at three Ontario auctions. Over 16 weeks last May through August, the team looked for four traits: gait, hock injury, body condition and tail docking, and assessed them relative to standards established by the Canadian dairy industry’s 2017 ProAction program animal care guidelines.

They found almost 73 per cent of the animals had an abnormal gait. This ranged from a noticeable limp, to an inability of the rear hooves to naturally “track-up” and walk in-line with the front hooves.

Cows in this condition sold for, on average, $32 less than unaffected animals.

The trait associated with the biggest financial loss was poor body condition. Just over 40 per cent of the animals had a body condition of two or less (using a five-point scale, where five is obese).

These cows sold for, on average, $116 less than cows with a body condition of three or more.

More than 27 per cent of the culled animals had a significant injury to at least one of their hocks, defined as a laceration, or swelling bigger than one inch (see photo on right).

That’s an unacceptable level by industry standards. However, it didn’t affect the sale price.

Tail docking had no influence on price, either. But researchers were surprised to find tails missing from more than 12 per cent of the auctioned animals, given that since 2009, the Canadian dairy industry’s Code of Practice has called for no docking (unless deemed medically necessary by a veterinarian).

Given most dairy cows in the auction can be estimated to be four or five years old, the survey suggests this requirement from the Code of Practice has not yet been fully implemented on all farms.

The study was led by Department of Population Medicine professors Derek Haley, Todd Duffield and Dave Kelton, along with Ann Godkin, Jeffrey Rau and their graduate student, Allison Moorman.

Moorman says culling dairy cows is a normal management practice. About 30 per cent of a herd is culled annually. In Ontario, of the one million animals sold at auctions annually, an estimated 110,000 are culled cows. Ontario, being centrally located, is a hub for auction activity in this country.

Cows are culled for several reasons, the most common being fertility problems, low milk production or udder problems. It might also be a matter of timing and turn over, making way for new herd members with different or better genetics.

However, disease and injury can also contribute to culling by causing or contributing to fertility or production problems. They may also impact a cow’s ability to handle the stress of transportation to an auction, which can require up to five days in transit, depending on the farm’s location.

“Profitability and animal welfare may impact producers’ timing for shipping culled cows,” says Moorman. “They might refrain until the animal is healthier, can better withstand the rigours of being sent to auction, and is likely to bring in more money. Or they might choose to send it directly to an abattoir, meaning they’re likely to spend much less time being transported.”

The transportation issue is significant. It’s become a hot button with the public and with animal advocates, as shown by the high-profile trial last year involving an individual who, despite warnings, fed water to pigs in a trailer being shipped for processing. Regulations about transportation are written into the federal Health of Animals Act; nonetheless, even the best transportation management can look unappealing to casual observers.

“The numbers will start the conversation and get people talking,” he says. “We all want to know what we have to do to make the situation the best we can for these animals, and eliminate questionable cows from being subject to unnecessary stress.”

This research is supported by the Highly Qualified Personnel scholarship program of the U of G – OMAFRA agreement, and Dairy Farmers of Ontario. 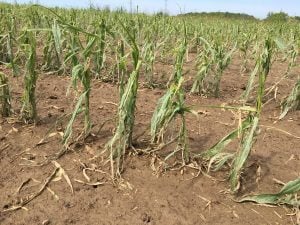 Ontario crops have experienced widespread hail damage in recent weeks and many growers are asking how they can minimize the yield impact. In this episode of RealAgriculture Corn School, agronomist Peter Johnson takes us to a field of eight-leaf corn that has been shredded by a recent hailstorm. He says at this stage, yield loss…Read more »

How Will Washington React to the WTO’s Final Word on COOL?

New Approaches to Crop Protection — This Time, Let’s Beat Activists to the Punch