Last week we heard House Speaker Paul Ryan (R-WI) lay down a Congressional schedule deadline for  a NAFTA 2.0 deal of May 17th. The negotiators did not meet the deadline and in fact, it was ignored like it never existed. Each country is spinning their version of what is left to do to complete this arduous process. Last week ended with a very grumpy U.S. trade negotiator and a rosy Canadian Prime Minister.

Trudeau is positive, like only a Canadian can be

“We are close to a deal. We are down to a point where there is a good deal on the table,” said Trudeau on Thursday.

Lighthizer: “Nowhere near close to a deal”

“The NAFTA countries are nowhere near close to a deal,” said a statement from U.S. Trade Rep Robert Lighthizer late Thursday. “We of course will continue to engage in negotiations and I look forward to working with my counterparts to secure the best possible deal for American farmers, ranchers, workers and businesses.”

So with the NAFTA talks dragging, agriculture watches with anticipation these three trading partners can find a deal. Here are three potential directions the talks could go:

It appears that for the time being the intention is to grind out the talks, no matter the Congressional schedule. There are no safe bets with U.S. Congress and this week’s defeated farm bill is recent proof. President Trump and Lighthizer do not want a NAFTA 2.0 getting the thumbs down once they require approval from U.S. lawmakers.

Alex Panetta of the Canadian Press outlined the timeline strategy for the the U.S. side on May 18, 2018.

“But one thing @danujczo points out: Lighthizer might have a perfectly valid reason for resisting a sprint to the finish – the fear that the NAFTA deal that exists has nowhere near enough votes to pass the US Congress, would disappoint a bunch of industries ignored in the deal, alienate donors to Republicans in an election year, backfire spectacularly on the administration, and lead to more problems than if you simply drag things out for a while. Trump’s said to be sympathetic to the idea of a quick win, but is willing to go either way. Apparently, this tug-of-war might last a little longer, until closer to the Mexican election, around which point the countries will have to decide whether to wrap it up, or pause to 2019.”

As the talks focus on the auto industry’s wages and rules of origin, the supply managed sector holds its ground very firm on not giving an inch to the American side. The battle over dairy access is still yet to play out in these NAFTA 2.0 talks but a democratic win in the mid terms could create even more pressure to resolve the issue for the deal to pass congress.

If Congress saw May 17th as a deadline, a member of President Trump’s cabinet does not — also, the idea of a withdrawal seems to have evaporated.

“So whether we pass it in this Congress or we pass it in the new Congress, the president is determined that we renegotiate NAFTA,” US Treasury Secretary Steve Mnuchin said in an interview on Fox News Sunday. He continued, “I’m just saying right now we are focused on negotiating a good deal and we’re not focused on specific deadlines.”

With nine of the thirty chapters completed, all three parties are searching for the best path to hold the deal together and move on. It seems that this is easier said than done with all of the politics in play. 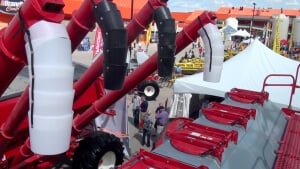