After a late spring, including snow only a few weeks ago, Ontario corn planting is off to the races.

A Twitter roll call, with over 100 Ontario producers reporting their progress, suggests that about 10 percent of Ontario’s corn has been planted, as of Sunday night.

The majority of producers with 20 percent of planting complete, or more, farm in the Chatham-Kent, Middlesex, Elgin, and Norfolk counties. The southwestern Ontario clay regions, such as Lambton for the most part, still have their planters in the shed.

In central Ontario’s Northumberland County several producers have a quarter of their crop planted, while heading east toward Ottawa, corn planting is yet to start, however, spring cereal planting has started or is complete. Some producers who have not started planting in Dundas County are planning to start by the middle of this week.

Become a subscriber to the Grain Perspectives newsletter.

“It looks like this 10 percent represents most of the lighter textured soils of the province. Many growers are waiting on the heavier soils to dry out a bit more, which has been tough with fairly significant rainfall every 5-7 days in most geographies. Soil temperatures are fit to go across the province in conventional till and no-till soils, but excessive moisture is holding us back. We can easily lose the benefit of early planted corn by mudding (the crop) into wet soils, but reality comes into play here soon enough and we have to go… I have not heard much talk of switching hybrids yet in most geographies, but after this week I’m sure it’ll be a big topic.”

Here’s a look at the percent of corn planting progress reported by Twitter respondents, by county, as of Sunday evening: 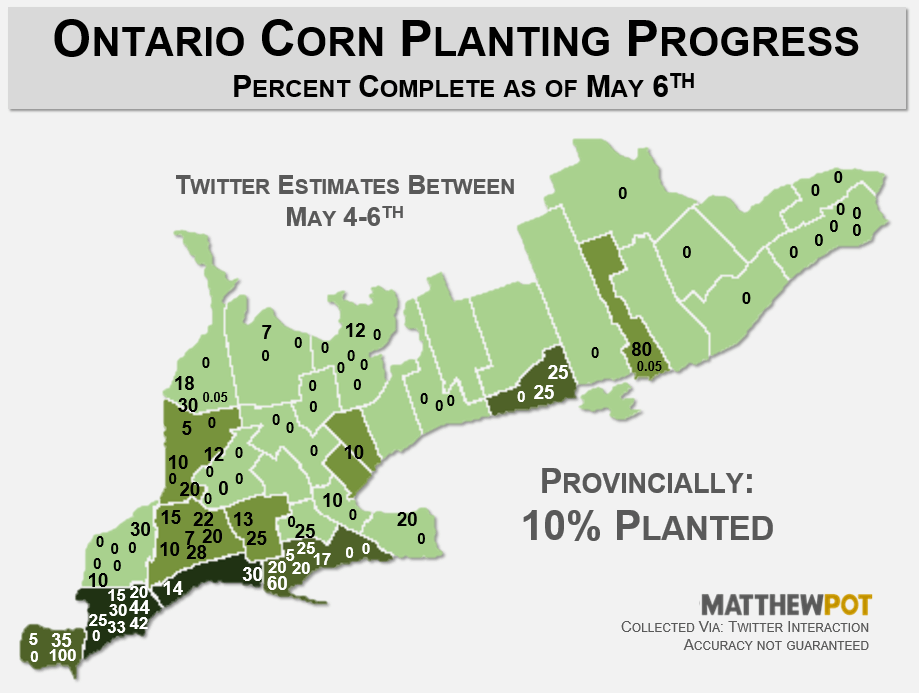 One Report to the Next — This Week in the Grain Markets