Grain markets were mostly higher this week in a risk-off sort of mood thanks to a relaxed tone of the trade war narrative we’ve been hearing, as well as a some weather premium creeping into the complex.

Nearly two months ago, you could say soybeans (and soybean prices) were on the verge of Armaggedon as it related to trade with China. Back in early April, when the trade war volleys were just starting, we took a deeper look at the relationship between U.S. soybeans and China in a FarmLead Insights piece. Six-and-a-half weeks ago we told everyone to take a breather and not to panic. Even as recent as three weeks ago, I was quoted in Bloomberg saying, “There’s a very strong possibility that there’s not going to be any soybean tariffs.” (This is what we call a timestamped position).

U.S. Treasury Secretary Steven Muchin said this about China’s purchasing intentions: “There are very hard commitments in agriculture where we expect to see a very big increase, 35-40% increase in agriculture, this year alone.” Comparably, China’s Vice-Premier Liu He was quoted as saying, “The two sides reached a consensus, will not fight a trade war, and will stop increasing tariffs on each other.”

While there’ll be some who say that we’re not out of the woods yet, I’m not going to disagree. But these quotes are an indication that we’re not going to see an about-face from either player. As such, soybean prices performed positively this week, up 4% to 5% across the various contract months, with the November 2018 contract notably closing back up above US$10.50/bu.

This also helped corn prices gain about a dime on the Chicago futures board. However, corn prices are likely being more influenced by speculators getting out of short positions and the dryness in Brazil. While some rains were received last week, expectations over the next 10 days is that there will be little rain, and soil moisture will continue to deplete. As such, any rains in June will likely be too late to support a bigger corn crop in Brazil. Local estimates for the 2017/18 Brazilian crop are now trending closer to 80 million tonnes, or about 10 million tonnes lower than the likes of the USDA, IGC, and other major forecasters.

Dryness is also having a bullish impact on wheat prices. Dry conditions continue to be talked about everywhere: from Australia to Russia, U.S Southern and Northern Plains, and obviously Western Canada. Looking at some soil moisture maps from the most recent crop reports, Saskatchewan is certainly sitting in a less-than-ideal position going into the bulk of the growing season. 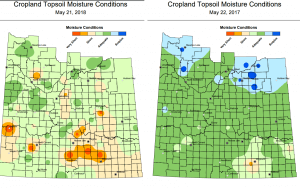 The adage of “plant into dust and bins will bust” is ceremoniously being shouted from analysts and farmers alike, but the dryness is a cause for speculation.

That being said, spring wheat prices in Minneapolis, gained about 2.5%, or 15¢, for the week to close at nearly US$6.50/bu on the front month and about a nickel higher on new crop contracts. For winter wheat prices, both Chicago and Kansas City futures markets were up by a quarter this week, or more than 4% on said dryness concerns.

While the memories of last year’s intense rally in grain prices are getting discussed more and more, we do need to be cognizant of some bias. First, the world is still awash in wheat. Second, there are more spring wheat acres going in than last year. Third, wheat is a weed and somehow finds a way to grow. If you doubt that, look at last year’s surprise in production. That being said, again, we’re cognizant of the soil moisture condition and so we’ll be watching that closely going forward. After all, seeding just finished and the growing season has a long way to go.

Canola had a healthy little run in this shortened-trading-week on the Winnipeg ICE futures board. The July contract hit some resistance around $540/tonne while new crop canola prices on the November contract wiggled its way up to $527 on Thursday before closing the week at $525.30. That was good for about a 1.3% gain for the week.

The Canadian dollar dropping nearly below 77 cents this week has certainly helped canola prices. Values for other vegetable oils like palm oil and soy oil have also been climbing, which in turn has supported canola as well. 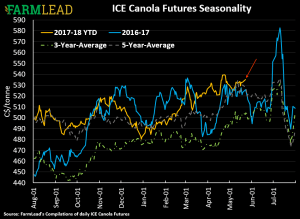 One of the main reasons though is that there is seasonality in demand and speculation. Currently, most producers aren’t thinking about delivery or contracting grain. Further, gossip about how big (or small) the crop is, how it’s performing, etc. starts to build. As shown in the chart, canola prices tend to see some volatility over the summer months but the downtrend practically always starts in early July.

Wheat on an island in the grain market, as early harvest reports come in

WGEA will not step in between farmers and elevators on admin fees, penalties