There’s been plenty of buzz this week among farm groups and the grain industry about the long-awaited passage of Bill C-49 — the federal government’s transportation legislation that covers everything from airline ownership rules to what grain companies can put in contracts with railways.

Without getting mired in the technical details of the bill, the main questions many farmers are asking are: what does Bill C-49 do? And more importantly, will it result in better grain-shipping performance by CN and CP?

There’s a fairly long list of pieces related to grain in the bill, but to answer the first question, in summary, the changes in C-49 are designed to give grain shippers new tools to hold railways accountable for how they perform when it comes to hauling grain.

As for the second question, farm groups and grain companies are definitely optimistic it will result in better overall service, but there’s still an aspect of “wait and see” as the changes are implemented in reality. As one Manitoba farmer tweeted on Thursday, “I’ll believe when I see it.”

So why do grain shippers expect it will improve rail service? These are the main grain-related pieces in C-49:

This is one of the big changes. The legislation gives grain shippers the ability to enter into year-long commercial contracts with a railway that detail the level of service expected by the railway. The legislation also enables grain shippers to negotiate and enforce “reciprocal penalties” against railways for not meeting these service standards. If the two sides can’t agree on these terms through negotiation, the Canadian Transportation Agency has the authority to arbitrate a service level contract. 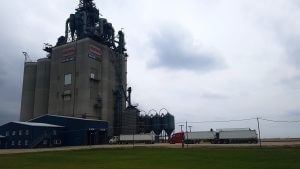 Now that the bill is passed, grain shippers will notify railways of their intent to enter into these level of service agreements. Given the tight timeline before the start of the 2018-19 crop year on August 1, it will likely be a year or two before these contracts are fully in place.

Other pieces of the bill will take effect almost immediately, including the new long-haul interswitching mechanism, which allows an elevator to apply for service from a railway that it is not located on (the local railway would be required to provide the service.) The Canadian Transportation Agency (CTA) has 30 days to respond to a long-haul interswitching request.

Speaking of the CTA, the agency will no longer have to receive a formal complaint from a grain shipper to launch an investigation into grain shipping performance problems. It can now investigate rail performance when approved by the transport minister. C-49 also clarifies the CTA’s definition of “adequate and suitable” accommodation by railways.

C-49 includes new data-reporting requirements for the railways. CN and CP will also have to file reports with the transport minister on how they plan to move the crop each year. These pieces are expected to be in place for the new crop year.

The volume-based maximum revenue entitlement (MRE) or “revenue cap” for grain remains in place, but the formula that regulates how much railways can charge for hauling grain has been tweaked to account for any investment a railway makes in grain handling, such as hopper cars. Previously, the MRE formula shared the benefit of that investment between both CN and CP, which reduced the incentive to invest. This change is one of the main reasons why CN announced plans to purchase 1,000 new hopper cars after C-49 was passed.

Soybeans have also been added to the list of commodities that fall under the MRE.

From the grain shippers’ perspective:

To explain what all these changes in C-49 mean, and when we might expect to notice their impact, we spoke with Wade Sobkowich, executive director of the Western Grain Elevator Association, which represents the major grain companies in Canada. Read the highlights below.

Kelvin Heppner, RealAg: Why is C-49 so significant?

Wade Sobkowich, WGEA: “We have been after a commercial-like arrangement between greain shippers and raiways for decades. The problem we have is the railways are dual monopolies, and as monopolies, they exert their monopoly power over shippers. For example, they have the unilateral ability to set tariffs that dictate the terms of services that the shippers need to adhere to and the penalties they will pay if they don’t meet that service. Bill C-49 gives shippers the commensurate ability to do that for the railways.

It’s a big step in rebalancing the relationship between shippers and railways to provide something that is more commercial-like in appearance.”

“We really can’t get these service contracts in place before the beginning of next crop year (on August 1), but we may get some in place by the beginning of 2019. Many shippers are going to begin that process quickly and try to get as far as they can…the railways will be inundated with requests to negotiate and the CTA will be inundated with requests to arbitrate, so what that does to the timelines, I’m not exactly sure.

It’s going to be very important that the Canadian Transportation Agency is provided with adequate resources to deal with these new provisions, like own motion power, arbitration on service level agreements, like the long-haul interswitching applications. That’s the next pieces to this.”

If I’m a railway, do I approach a grain company and say ‘we’ll give you this discount, if you agree to not go through the service level agreement framework.’ Do you see it playing out that way?

“The railways have common carrier obligations. They have to sort of treat all shippers equally under the Canada Transportation Act, and that includes rates. We have the maximum revenue entitlement in place already, which governs what the railways can earn off of grain shipments. So if it offers less in rates to one shipper, it will have to make that up in higher freight rates to other shippers. I think it would be a real dicey area to get into.”

“I think the railways will be interested in setting a precedent on what service obligations for them look like going forward… Once they offer those sub-standard service contracts to other shippers, then they’ve set a precedent. Will the agency then take those into account when ruling on new service agreements? I think the railways will try some of those things, and I think they’ll probably also challenge the process in every step of the way.

It’s going to be difficult process for them to get through, but we’re going to start, and in a few years, maybe we’ll have some service contracts, the aggregate of which, will have an end result in an increase in capacity and overall better service for the grain sector.”

Does this mean it could take two or three years to see the impact of C-49?

The provisions on data reporting, reporting to the minister on winter contingency plans and how to move the crop every eyar, we think that is going to be in place this fall. The better definition of what it means for the railways to provide “adequate and suitable” accommodation will also be something that will be in effect immediately.”

From the show ring to the tax file