Steel prices in North America are on the rise and the impacts are just beginning to be felt in farm country. In the U.S., steel prices were already up 37% year to date and expected to go higher with the imposition of 25% import tariffs on steel from Canada and Mexico.

According to the Financial Times, steel price increases in the U.S. have outpaced other global suppliers. 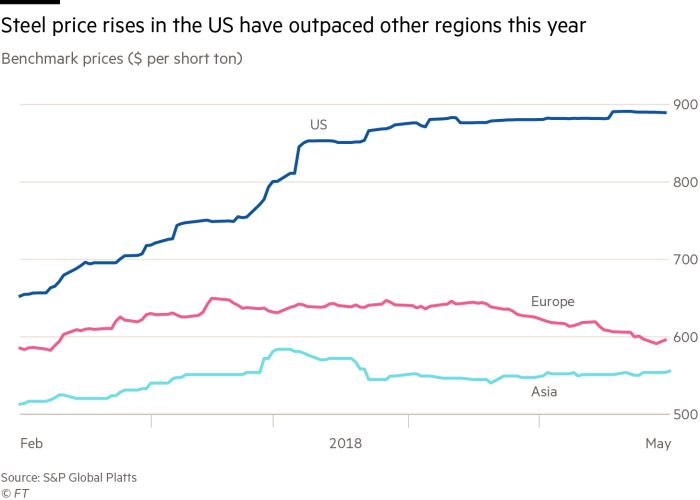 That’s having an impact on manufacturers’ input costs, as John Deere, for example, says it will be raising its prices to offset higher costs (as reported here by Bloomberg.) “We are experiencing higher raw-material and freight costs, which are being addressed through a continued focus on structural cost reduction and future pricing actions,” says Deere & Co. CEO Sam Allen.

“These harmful tariffs will directly contribute to higher steel prices, increase costs for agriculture and construction machinery, wreak havoc on the business operations of equipment manufacturers, and jeopardize many of the 1.3 million good-paying jobs our industry supports,” notes Dennis Slater, the president of the Association of Equipment Manufacturers.

AEM released the below commercial to show support for Donald Trump’s agenda on tax cuts, but points out the steel tariffs are mitigating those benefits.

U.S. manufacturers aren’t the only ones impacted by tariffs, as Canadian manufacturers who buy U.S. steel will face higher costs if Canada goes ahead with its proposed retaliatory tariffs on U.S. imports, including steel, on July 1.

The Agricultural Manufacturers of Canada tweeted that it is “very concerned” about the trade rhetoric turning into tariff action this week and the impact on its membership.

Canada is the largest importer of U.S. steel, taking 55% of U.S. exports. The longer the tariffs are in place, the higher the probability that Canadian manufacturers source more of their steel domestically, or from Europe and Asia.

Both MacAulay and Perdue need to step up for agriculture

How much will current tension in the Middle East impact Canadian ag exports?