The Canadian government has offered to allow more dairy imports under its supply management system as part of NAFTA negotiations, but the U.S. administration felt the concessions that were offered weren’t enough, according to U.S. Agriculture Secretary Sonny Perdue.

“They made an offer most recently that they felt like was a very fair offer. I didn’t think it moved far enough in that way. And hopefully they can come back and we can negotiate that,” Perdue told Farm Journal’s Tyne Morgan, host of U.S. Farm Report, on Wednesday in an interview shared with RealAgriculture.

His comments add to what Prime Minister Trudeau said on U.S. television this past weekend, when he told NBC’s Chuck Todd that Canada was “moving towards…flexibility” in the area of dairy access.

Canada conceded tariff-free market access for dairy products in the Canada-EU trade deal and the CPTPP, where the U.S. negotiated access for another 3.25 percent of the Canadian market before withdrawing from the deal.

Perdue did not give any indication how much additional access Canada offered at the NAFTA table, nor what the U.S. would agree to, but he sounded optimistic that negotiators will be able to come to an agreement on dairy.

“I think we’re really close to a deal, you know there, but some of the revisions, obviously regarding the sunset — the five year sunset — were the most difficult to negotiate. But I think on the ag issues we’re pretty close and I think Canada wants to make some changes there,” he said.

A spokesperson for Canada’s Foreign Affairs Minister, Chrystia Freeland, suggests Canada didn’t view the conversation about dairy that Perdue referenced as “an offer.”

“Recent discussions on this and other issues centred on understanding U.S. positions. As we have repeatedly stated, we will stand up for supply management and our dairy farmers,” said Adam Austen, in an email on Friday.

“We may disagree with President Trump’s demands on access to the Canadian dairy market, but we recognize he is advocating for his dairy industry. As Canadian dairy farmers, we expect no less support from Prime Minister Trudeau,” he said, in an email statement.

DFC sent a letter to Trudeau earlier this week, calling prime minister’s comments on NBC on Sunday “deeply troubling.” The letter also implied DFC has an outstanding request for a meeting with Trudeau.

President Trump, meanwhile, published several tweets late Thursday and early Friday accusing Canada of not being fair to U.S. farmers, calling Trudeau “indignant” and telling Canada (and the European Union) to “take down your tariffs & barriers or we will more than match you!”

Trump will make first presidential visit to Canada for the G7 leaders’ summit in Quebec on Friday and Saturday. He’s scheduled to hold a bilateral meeting with Trudeau on Friday.

Related: Trudeau confirms flexibility on dairy in NAFTA talks, but what does that mean? 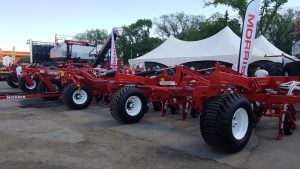 Morris Industries will continue to operate despite filing for creditor protection

The Morris Group, comprised of Morris Industries, Morris Sales and Services, and Contour Realty Inc., have been granted an order extending the stay of proceedings under the Companies’ Creditors Arrangement Act (the “CCAA”). The extension was granted until March 27, 2020, and means the company can continue to operate in an effort to restructure and…Read more »

How slow is your Internet? CRTC wants your help, feedback

Pulse School: Sorting Out the Pulse Export Problem With India