The name Monsanto is headed for retirement.

Bayer has confirmed it will no longer use the name after it closes its US$63 billion acquisition of Monsanto.

Monsanto has been the target of anti-GMO activists for years, serving as a corporate lightning rod for critics of genetic modification and crop protection technology in general. Whether referenced in protestors’ signs at annual “March against Monsanto” events (above) or in often ill-informed social media conversations, for a significant portion of society, the Monsanto name and brand represents something broader than the St. Louis-based company. Even when Monsanto isn’t involved, the name has often been invoked and associated with aspects of agriculture and food that people dislike or are uncomfortable with.

“You will probably recall Monsanto had actually itself considered changing its name and decided not to do that, apparently for cost reasons at the time, but it was an issue for some time for Monsanto management as well to try and improve the Monsanto brand,” noted Bayer’s Liam Condon on Monday.

Bayer itself has also developed and sold biotech crops and crop protection products for many years, but the company name has not been subjected to the same level of controversy, and is still better known for its pharmaceutical offerings, including Aspirin. 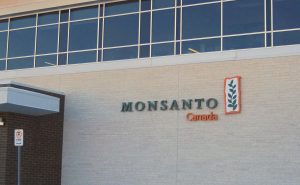 Some people will say it’s about time the name Monsanto is buried, along with the baggage it carries. That there’s no need to continue using a word that draws such emotional reaction when we’re trying to have a rational conversation.

But others may argue it’s just a name, and the anti- crowd will just move its sights to another target. As a lightning rod, Monsanto has effectively shielded other companies and shouldered more than its share of criticism.

The name also means something different to people involved in broadacre agriculture who have witnessed the company’s significant contributions to modern farming, evidenced by widespread adoption of Roundup Ready crops across North America. Roundup and the later introduction of Monsanto’s glyphosate-tolerant canola played a critical role in the shift to zero-till farming in much of Western Canada — a major environmental achievement.

Monsanto’s complicated legacy will certainly live on, but it will soon be referred to in the past tense. Is this a good thing? Would you rather see Bayer maintain the brand?

Here’s a chance to share your opinion (feel free to comment below or send an email to [email protected]):

Related: The Corporation Conundrum: Why Consumers Hate Monsanto, But Love Their iPhones

A Different Sort of Branding Pain

Beef Market Update: It Could Be Worse

Lennon takes over as general manger for the OFA