More Canadian farmers believe that the need for improved profitability will prompt them to use field data management software in the future — and nearly one-quarter of non-users and current users say they are likely to adopt new software in the next three years.

These are among the findings from Stratus Ag Research, in its second annual survey of field data management software use. The company’s research was conducted over a one-month period in the winter, with feedback from 700 Canadian farms.

The survey showed significantly more farmers — 38 per cent in 2017, versus 26 per cent in 2016 — said productivity increases and margin squeezes are the main external factors driving their interest in adopting field data management software.

Another noteworthy change was in eastern Canada, where the uptake of data technology jumped by more than one-third in just one year. About 35 per cent of the 200 farmers surveyed in Ontario and Quebec used field data management software in 2017; that’s a leap from 25 per cent the year before.

That increase puts eastern Canada farmers slightly ahead of their western Canadian counterparts, many of whom had already adopted the technology. They reached the 35 per cent plateau last year, but fell back a bit to 33 per cent in 2017.

Nonetheless, the overall figures shows slightly more than 34 per cent of the producers surveyed are using one or more of the 20 field data management software solutions available in Canada.

“The market is evolving quickly,” she says. 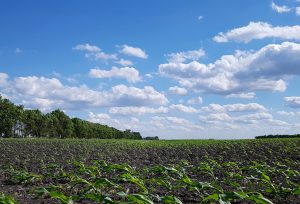 But there’s still room to grow. Although the research shows producers are increasingly moving towards using field data management technology, about 45 per cent of all respondents have yet to make the leap.

Nearly one-third of them say it’s too costly, or they don’t feel it is worth the investment. Another third say their current system of amassing field data is adequate.

Still, 23 per cent of all non-users said they are planning to adopt new field data management software in the next three years.

MacLean says the big increase in the east reflects the introduction of the Climate FieldView platform, which was first introduced to farmers in Eastern Canada in 2016. Another factor is an increase in farmers using the DuPont Pioneer Encirca platform.

Climate FieldView was introduced in Western Canada in the fall of 2017, and she expects more uptake to be seen there in the 2018 survey.

Through data gleaned from the survey, MacLean was also able to determine that use of software is more frequent among farmers who are:

Slightly more than half of the respondents said they don’t work with a third party to analyze, interpret or make recommendations based on knowledge gathered from field data management software. However, among those users that have strong relationships with their advisors, two-thirds say they give them direct login access to their software platform.

MacLean says software developers should consider that farmers say the two most important attributes a software solution must have is ease of use, and that farm data is easily accessible all in one place.

Respondents for the survey were screened for growers with a minimum of 2,000 acres in western Canada and 400 acres in Ontario and Quebec.

The irreplaceable human element in ranching

The U.S. agriculture industry — and economy as a whole — breathed a sigh of relief early Thursday morning when Labour Secretary Marty Walsh tweeted that a tentative agreement had been reached between rail companies and the unions representing railway workers that were threatening to go on strike on Saturday. The Canadian agriculture sector, for…