Grain markets had a very rough week heading into the middle of June, surrounded by trade uncertainty and positive crop conditions.

In fact, forget about crop conditions. Or rainfall. Or heat units. Whether or not the borders are open for business has become the only fundamental factor that really seems to matter to the direction of grain prices these days.

For the week, and so far in June, this is how prices on futures boards have performed on front-month contracts: 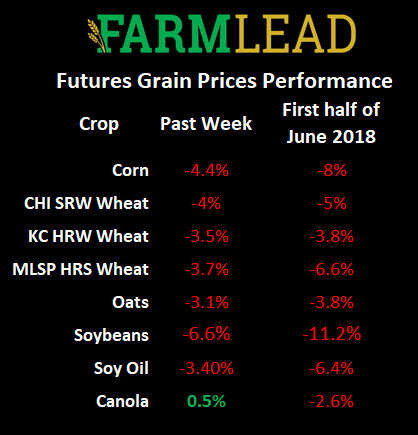 We did get some bullish ideas on corn and soybeans this week from the June WASDE, but those supply and demand balance sheets were proved irrelevant when it comes to billions of dollars of agricultural trade!

More concretely though in the WASDE, the USDA rarely touches corn production numbers, and so the 2018/19 corn harvest is estimated to be the same as last month at a little more than 14 billion bushels. However, U.S. corn demand is on the rise and so 2018/19 carryout is expected to come in at 1.58 billion bushels, down 105 million bushels from the last report and 80 million bushels below the pre-report expectations.

The USDA also didn’t touch the U.S. soybean yield number, so again, U.S. production was left alone at 4.28 billion bushels. However, the agency reported higher crush numbers and a significant reduction in 2018/19 US soybean ending stocks, when the market was expecting a slight increase.

For the usual WASDE report, the world canola balance sheet doesn’t garner a whole bunch of attention. And the June WASDE didn’t really change that rhetoric, however, there are ideas that some spillover from soybeans is helping world canola prices find a bottom.

For winter wheat, the USDA followed the lead of other private firms in lowering the size of the Russian 2018/19 wheat crop by 3.5 million tonnes to 68.5 million tonnes. They also dropped Russian wheat exports by 1.5 million to 35 million tonnes for the new crop year. In both the US and global, wheat ending stocks were raised slightly for 2017/18, but lowered for 2018/19. 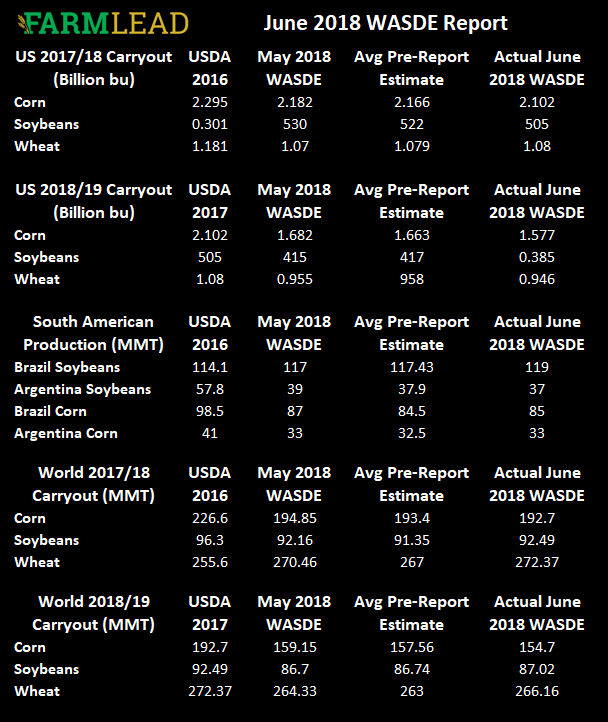 In barley, nothing was changed for the US crop but the global barley balance sheet had some notable updates. Both 2017/18 and 2018/19 global barley carryout were raised to 18.55 and 17.73 million tonnes respectively. This, despite world barley production in 2018/19 being lowered by 610,000 tonnes month-over-month to about 147 million tonnes in this June WASDE report.

Ultimately though, once the WASDE was done and out of the way on Tuesday afternoon, it was all about trade war speculation and the flow of grain. For Canadian farmers, the wheat market took a bit slap in the face after the Canadian Food Inspection Agency said they found some genetically-modified wheat in a ditch in southern Alberta. The next day, Japan said they weren’t buying any more wheat until further notice.

Further, on Friday, the U.S. government implemented $50 billion USD worth of tariffs on about 800 Chinese goods. Not to be outdone, China came back with retaliatory tariffs that they’ll be implementing on farm goods and aircraft. The U.S. government has suggested that, with the Chinese retaliation, they have another $100 billion of tariffs also in mind.

Since this column is written on Friday afternoon, by the time you’re reading it on the weekend, the whole situation could be completely changed.

There are a couple reasons as to why global trade has become so contentious. The main conclusion is that we have never been in a situation that’s been so volatile across so many commodity sectors. And with information coming at us very quick via social and other media channels, it’s hard to comprehend what’s real and what’s not.

Further, there is an increasingly protectionist attitude that the major global economies are starting to lean towards. I’m looking at you America, Italy, and United Kingdom.

Usually, at this time of year, the grain markets are fixated on weather and crop conditions. But all of that means nothing when whatever production you harvest has limited options to head towards in terms of demand. And with it appears there are a declining number of options for grain exports (read: demand), grain prices, unfortunately, get slapped around.

The Grain Markets this Week — A Return to Risk?