Ranchers in Western Canada have faced some real challenges this spring. For some early calvers the late winter posed some serious problems for mortality, and now the hot, dry conditions are posing major grass concerns.

There has been talk of cattle already being pulled off southern pastures to be moved up north. From a marketing, perspective cattle coming off of grass earlier into feedyards will be a story to follow this summer, if the hot and dry conditions continue as Drew Lerner, World Weather Incorporated predicts.

In the heat map below (courtesy of Global) we see that May was hotter than normal which, in combination with low accumulated rainfall, has created tough conditions for pastures. 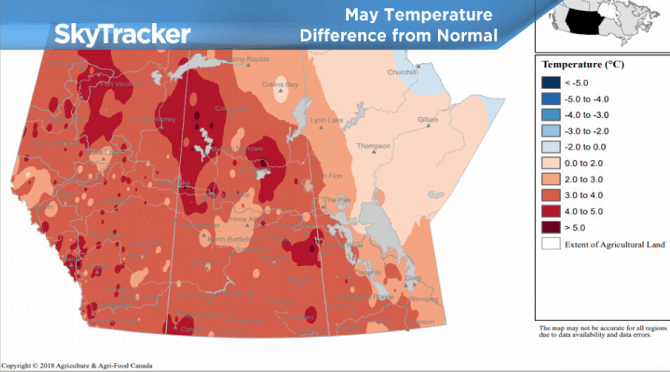 For some ranchers there has been some moisture, but the dryness concerns are real. Tim Oleksyn, who farms and ranches around Prince Albert, Saskatchewan, told RealAgriculture: “Under an inch of rain in the last week (and) grass is still really stressed. Just seeing a response this morning, really. Still feeding the majority of the cows/calves silage on 80 acre paddocks. The smooth bromes (are) hurting big time, meadow bromes are on idle while the alfalfa is holding up.”

Still feeding some cows , the grass is just coming with this little rain #ranchlife #sustainablebeef pic.twitter.com/H2iwlRHmMk

Tara Davidson from Ponteix, Saskatchewan says, “The rain has been very very spotty this year. We received no rain last week. A week earlier one of our hay fields caught a small unforecasted shower. We would take whatever we can get for moisture right now. I’m grateful we had the snow we did in April because we are doing all right for stock water so far. But things will change quickly with the hot, windy days.”

Bruce Holmquist ranches at Kinistino in NE Saskatcewan says, “Pasture conditions were desperate. Approx 1.5 inches all last years growing season left pastures overgrazed about 50 percent of normal hay yield. 1.2 inches of rain on Friday was much needed and will give grass a boost. Crop is seeded with good germination due to snow in March. Will need a return to normal precipitation for rest of growing season as there is little reserve soil moisture.”

There are some positive signs. Sheldon Kyle at Redvers, SK, tweeting a picture showing the pooling of water after a recent rain.

What a difference a couple of days can make! #blessed #cowstopasture #ranchlife pic.twitter.com/fb10XdrddP

On May 28th, Saskatchewan released its hay and pasture moisture map, and the conditions are quite serious in the southern area of Saskatchewan. 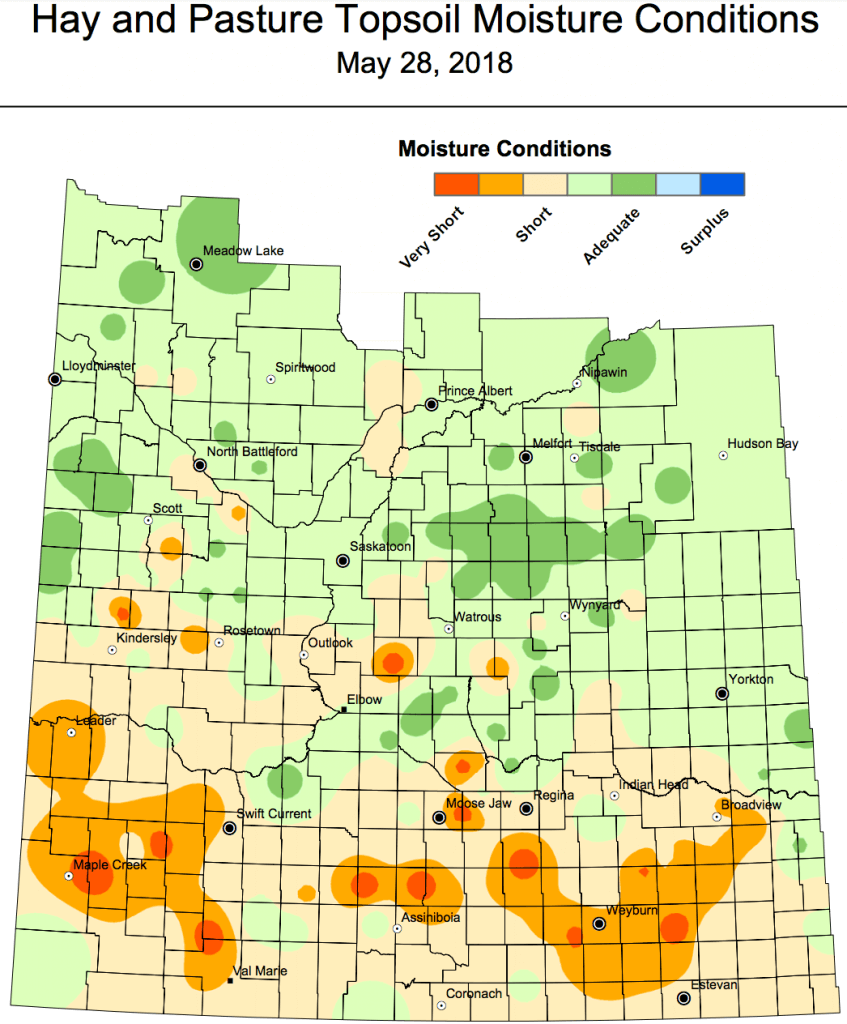