The Bank of Canada increased the target interest rate today by 0.25%, to 1.5%. This is now the fourth rate hike, amounting to 1%, since the Bank hiked rates for the first time since 2007 a year ago.

Over the last year, the Bank of Canada has matched the aggressiveness of the U.S. Federal Reserve, with the fast moving U.S. economy. 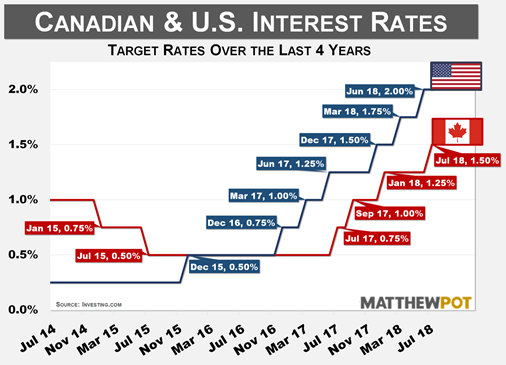 More times than not the market is prepared for a rate hike and the ‘tone’ of the announcement is more of the market moving aspect than the decision itself.

The Bank of Canada expressed that the Canadian economy is running near capacity. When an economy runs near capacity the Bank, with its proactive approach, will hike rates to avoid an inflationary run away.

For those who I have lost already, let me explain: a strong economy, and in turn job market, stimulates more consumer spending and increased demand for goods as more consumers come to the market. To control the cost of goods increasing as demand increases the Bank raises the cost of money by increasing rates to set back the demand.

The Bank of Canada is, in no doubt, optimistic about the ‘status quo’ economy. From an economic outlook standpoint, pulling aside the trade concerns we will discuss below, the Bank sees more upside potential than downside risk.

The Bank may have a cautious approach to the potential negative effects interest rates could have on household spending but, from what we have seen so far, the trend has not really been deterred in the presence of the previous rate hikes – the last of which was six months ago. This provides some confidence that we have not reached the potential threshold from higher rates. On the surface the Bank’s outlook is supportive for continued rate hikes. 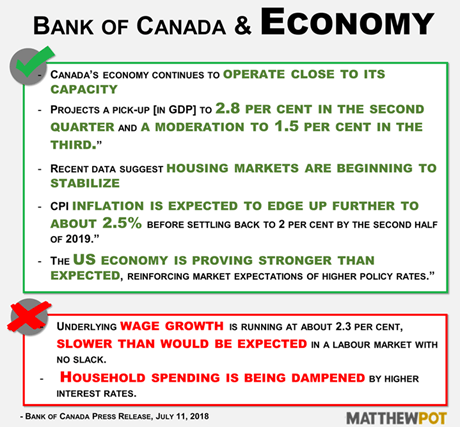 A supposedly strong economy is one thing, but with a proactive mindset, the Bank does have a cautious approach given the current trade uncertainty between Canada and the U.S. On Wednesday, the Bank said it currently feels the effect of the current trade disruptions will be “modest.” 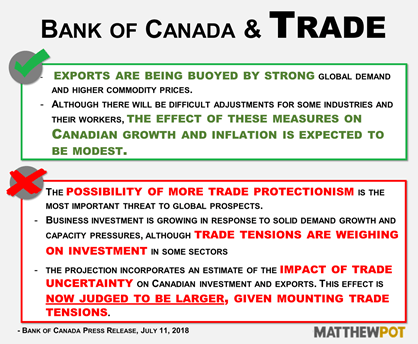 The economic uncertainty includes the direct economic damages any trade disruptions will have. Business investment may be cautious. Not to mention the indirect effect any tariffs could have on consumer spending as the price of goods rise as they adjust for their share of any tariffs.

For those of you who are pessimistic about today’s rate hike, it does provide ammunition for stimulus down the road if things do turn sour.

The higher the rates, with an economy that can presumably absorb them, the more ability the Bank has to stimulate the economy by lowering interest rates if the economy turns downward. Another get-out-of-jail-free card in case trade tensions increase, perhaps? Or for the cyclical economic downturn which we are naturally due for in time?

From a Canadian dollar perspective, if you remove the trade uncertainty in today’s statement it screams nothing more than continued interest rate hikes and the increased demand for the Canadian dollar. With all the pressure trade has put on our currency, if you take that pressure away and open the door to a clearer vision on interest rates, expect interest rates to rise more aggressively and the nervous Loonie to spring higher.