As the presidency term only lasts for one year, Hyra says the nice part is that you still get to see projects you’re passionate about go forward as you’re part of the board two years leading up as vice president along with the position after you gain presidency of past president.

“When you start a project you’re not starting cold … there’s some continuity to it all.”

As one of his top priorities, Hyra says Seed Synergy is a main focus as he believes it will move the seed industry forward. 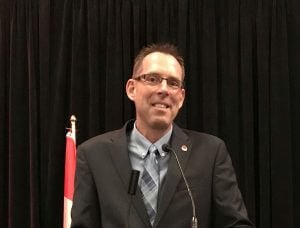 “It’s trying to bring all the seed organizations together (such as) — seed growers, seed trade, seed analysts, the Canadian plant technology agency, CropLife Canada, etc. — bring everybody closer together so the system is more streamlined, more efficient and has improved communication — ultimately improve product for consumers.

The idea of Seed Synergy coming together started about three years ago, but two years ago is when the ball really got rolling.

Hyra pointed out communication has really been key as they want to make sure every organization feels as though they have a voice. He says at any point various groups can walk away if they don’t feel comfortable with the direction; however, by having strong and open communication he feels as though they’re on the right track to be a leading force in the seed industry.

Speaking of going forward, Hyra says the 1991 Union for the Protection of New Varieties of Plants (UPOV91) — which some people call value capture — is one of the four pieces Seed Synergy will keeping their eye on. (Story continues below)

“Last week there was an agreement for the first time within the seed industry about “If we are going to have a value capture on farm safe seed, what does it look like?” And so there’s a proposal that’s been agreed to, still a whole lot of work as to what the structure might look like, but the goal is ultimately to attract breeding resources to Canada,” Hyra said. “Whether its large or small, pubic or private that there’s a reward for those who want to invest in our industry.”

Hyra says without adopting UPOV91, plant breeders weren’t even looking at Canada as an options as they had no resources to provide protection in their purchase. Adding that by having UPOV91, it will help producers more in the long run as he’s already found more international seed buyers are interested in the Canadian market.

Under the Microscope: The Future of Seed Testing