It’s been one year since the DOT field robot prototype made its first public appearance at Ag in Motion (AIM) near Saskatoon, Sask.

The machine has since attracted attention from people around the world who are interested in the future of autonomous farming.

Engineers in the DOT Technology Corp. shop in Emerald Park, Sask. have also made some changes to the U-shaped robot since the unveiling last summer.

“There’ve been a couple changes, or a couple thousand changes. Of course when you build a prototype, that’s when you review all the fine details. The prototype we had at AIM, it worked perfectly, but we learned a lot of things from it. It’s been a very busy year,” says DOT Technology Corp. CEO and founder Norbert Beaujot, in the interview below, filmed at Canada’s Farm Progress Show in Regina.

In addition to larger wheel motors and a new traction control system for muddy situations, one of the very visible changes on the outside of the machine is the addition of two arms that hold a trip wire — a physical sensor added to address concerns about safety and obstacle detection as sensor technology coming from the autonomous car industry evolves, he says.

Six units are in the field for testing this summer and fall, performing several tasks including seeding and spraying, says Beaujot. 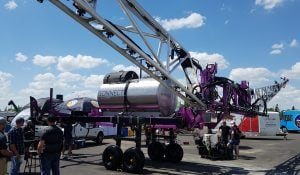 Pattison Liquid Systems has built a 120-foot sprayer prototype to be mounted on DOT — the first attachment for the platform to be built by an industry partner other than DOT Technology Corp and its sister company, SeedMaster.

The company also plans to test DOT’s performance with a grain cart (or buggy) attachment during harvest, he says.

In March, the company opened a program where farmers can make a deposit to reserve their place in line to purchase one of the autonomous machines. Beaujot says they’ve had a strong response, and are on track to have between 20 and 25 units built and sold for spring 2019.

“When I first started designing it three or four years ago, I thought it might be ten years away, but I was wrong. We are ready now. The technology is ready, our patents are ready, and the way the deposits are coming, farmers are ready as well,” he says.

The company has previously said the initial price of the base unit will likely be around US$250,000.

Everyone Loves an Auction at FarmAuctionGuide.com

Corn School: What you need to know about tissue testing

Corn growers often turn to tissue testing to diagnose a problem. When plants in a field are yellowing or pale, grabbing a sample and sending it to the lab can seem an obvious way to confirm a nutrient deficiency. But there's more to the tissue testing story than simply identifying a problem and finding a…