If you have heard us say it once, you will hear us say it again: the crop conditions in Western Canada are quite variable. Surprisingly, though, at Ag In Motion last week farmers repeatedly told us that crop conditions were better than you might expect.

This week, Farmlink Marketing Solutions staff and third-party field scouts toured around Western Canada on the Grain World Crop Tour. According to Jon Driedger, of Farmlink, the results were better than expected.

Dreidger told RealAg Radio, “(for) wheat, canola and peas, we would ratchet up our estimates but conditions are very variable. Crop looks good, but (it’s) not an outstanding crop.”

Spring wheat was the biggest surprise as Farmlink upped their own internal estimates from 50.5/bu to 54.5 bu. Canola was bumped up 3 bushels, which puts the estimated average higher than last years actual.

Driedger noted that Alberta may be the most variable of all three Western prairie provinces. 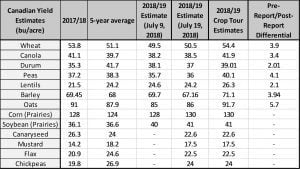 You can follow along with the scouts on the crop tour by viewing the Twitter hashtag #GWcroptour2018 .

It;s important to note that although the scouts found the results to be better than expected the range of yield is wide.

We’re seeing the impact that lack of rain is having in Reed Lake, Saskatchewan. This spring wheat field is the worst we’ve seen today! #GWCropTour2018 pic.twitter.com/spWoXFbZAp

The variability is not province to province or county to county but also one neighbouring field to the next. The below tweet showcases that extremely well.

Here’s one example of how varied Canada’s crops are. A good looking canola field on one side of the road north of Stewart Valley, SK and a sad looking durum crop on the other #GWCropTour2018 pic.twitter.com/nzG8wqjdqp

At the same time, in the U.S., the Wheat Quality Council’s Hard Red Spring and Durum Wheat Tour has been undergoing their own scouting, and the results were the opposite as yields have been estimated lower than expected and under the fiver year average.

This week, the Wheat Quality Council hosted its annual hard red spring (HRS) and durum crop tour. Participants spent three days mainly in North Dakota surveying this year’s crop and estimating yield. The tour, which surveyed a total of 342 fields, estimated weighted average HRS yield at 41.1 bushels per acre (bu/a), slightly higher than last year’s HRS average of 38.1 bu/a, which was impacted by ongoing drought conditions in western areas. The durum weighted average yield was 39.3 bu/a, in line with last year’s average of 39.7 bu/a, which was a decline from 45.4 bu/a in 2016. While the overall crop looks better than last year, it is still below the tour’s 5-year average of 45.4 bu/ac.

This year in the grain markets

Entering the Twilight Zone? — This week in the grain markets

The Grain Markets this Week — A Return to Risk?