Quebec-based track manufacturer Camso has reached a deal to be bought by Michelin for US$1.45 billion, as the French tire company looks to expand its presence in the off-the-road (OTR) market.

The agreement will see the two companies’ OTR operations combined into a new division that will be managed from Camso’s headquarters in Magog, Quebec.

Formed in 1982, Camso was known as Camoplast Solideal until 2015. The company is seen as a market leader in rubber tracks for farm equipment and snowmobiles, as well as in solid and bias tires for material handling equipment (eg. forklifts). Camso is also described in the news release as holding a top-three position in the construction industry, supplying tracks and bias tires for small heavy equipment. 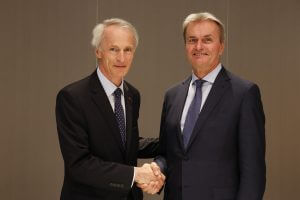 “This acquisition is a wonderful mutual opportunity. Michelin will benefit from all of Camso’s skills in the off-the-road mobility markets and Camso from the full range of Michelin’s expertise in the specialty markets,” noted Jean-Dominique Senard, CEO of the Michelin group.

Michelin says the number of employees at Camso’s headquarters, around 300, will remain stable, with existing R&D and production operations in Quebec continuing. Camso also has a strong manufacturing presence in emerging markets, particularly in Sri Lanka and Vietnam, says Michelin.

“Joining up with Michelin’s off-the-road teams is a fantastic opportunity for Camso because of the similarity of our cultures as well as our growth potential,” said Pierre Marcouiller, executive chair and CEO of Camso. “Camso will achieve its ambition to become the global off-the-road market leader and will contribute its dynamic teams, its technical and manufacturing assets and its customer-focused mindset. The transaction has received the backing of all Camso’s shareholders.”

Crop insurance extends some planting deadlines in Ontario: What you need to know