Rocky Mountain Equipment (RME) is adding two locations in central Saskatchewan to its dealer network, following up on the unveiling of a five-year plan that included additional acquisitions in Western Canada and expansion into the U.S.

RME announced the acquisition of John Bob Farm Equipment at Tisdale and Outlook on Tuesday.

Founded in 1980, John Bob is a dealer for New Holland agriculture equipment, as well as several short line brands, including Bourgault, Farm King, Elmer’s, and MacDon.

“John Bob’s two New Holland dealerships in the agricultural heartland of Saskatchewan are a perfect fit with our growth plan. Both branches, located in great agricultural communities with long-standing support for New Holland products, can take full advantage of our integration framework and capital to expand sales and profitability,” says Garrett Ganden, president and CEO of Calgary-based RME, in a news release.

While RME is known primarily as a Case dealer, Ganden says the company is looking forward to growing the New Holland portion of its business (Case’s sister brand under CNH.)

With the acquisition of John Bob, RME now has 36 agriculture branches across the prairies, including six locations in central Saskatchewan. The company says the two John Bob branches will tie-in to existing RME facilities in Kindersley and Preeceville.

“By joining Rocky Mountain, our branches will be able to give our customers faster access to more agriculture equipment products and services while providing customers with the great care they have come to expect from our people,” says John McShannock, founder of John Bob. “I have no doubt that, as Rocky Mountain grows, so too will the opportunities for our employees and the surrounding communities.”

The purchase agreement, which is still subject to closing conditions and adjustments, includes the following terms:

RME says it will use its existing cash and credit facilities to fund the acquisition. 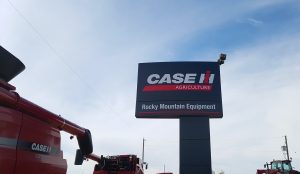 In a five-year plan shared with investors on May 30th, RME said its Canadian acquisition efforts will be focused in Saskatchewan, while purchases of Case New Holland dealers in Alberta and Manitoba should also be expected.

The company said it’s also looking to expand into the U.S., noting an acquisition south of the border could mitigate a number of risks, related to currency, crop, weather, political, transportation, and tariffs.

RME says there are several criteria to be met before entering the U.S. market, including approval from CNH, a strong management team, and a revenue base of approximately USD $100 million to serve as a growth platform south of the border.